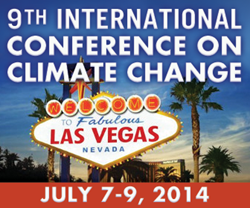 'The public, the press, and the scientific community will all benefit from learning about the latest research and observational data that indicate climate science is anything but ‘settled.’'-- Joseph Bast, president, The Heartland Institute

Hundreds of the world’s most prominent “skeptics” of the claim that human activity is causing a climate crisis will converge in Las Vegas on July 7–9 to review the latest research and celebrate what they see as recent events that vindicate their opposition to what some claim is a “scientific consensus.”

The Heartland Institute – which The Economist magazine in 2012 called “the world’s most prominent think tank promoting skepticism about man-made climate change” – is joining scores of other think tanks and advocacy groups to host the 9th International Conference on Climate Change at the Mandalay Bay Hotel and Casino in Las Vegas.

Heartland has organized and hosted eight International Conferences on Climate Change since 2008. These events have attracted extensive international attention to the debate taking place in the scientific community over the causes and consequences of climate change.

Conference details are coming together as July approaches, but the media and the public can see updates and register now for the event at the conference Web site.

“The scientists Heartland works with demanded we host a ninth conference this year to foster a much-needed frank, honest, and open discussion of the current state of climate science,” said Heartland Institute President Joseph Bast, “and we just couldn’t refuse. The public, the press, and the scientific community will all benefit from learning about the latest research and observational data that indicate climate science is anything but ‘settled.’”

One co-sponsor of Heartland’s 9th International Conference on Climate Change is FreedomFest, which is holding its annual gathering in Las Vegas from July 9–12 at Planet Hollywood. Several speakers from Heartland’s conference at Mandalay Bay will join the FreedomFest line-up.

Previous Heartland climate conferences have featured 187 scientists, economists, and climate policy experts from around the world and attracted more than 4,000 participants. Nearly 300 videos of presentations can be found at the archive site for the conferences.

For more information about The Heartland Institute and the 9th International Conference on Climate Change, contact Director of Communications Jim Lakely at jlakely(at)heartland(dot)org or 312/377-4000.

The Heartland Institute is a 30-year-old national nonprofit organization headquartered in Chicago, Illinois. Its mission is to discover, develop, and promote free-market solutions to social and economic problems.

The Nongovernmental International Panel on Climate Change (NIPCC) is an international panel of nongovernment scientists and scholars who have come together to present a comprehensive, authoritative, and realistic assessment of the science and economics of global warming.

FreedomFest is an annual festival where free minds meet to celebrate “great books, great ideas, and great thinkers” in an open-minded society. It is independent, non-partisan, and not affiliated with any organization or think tank.