Free cardiac screenings on February 27 helped to determine whether women are at risk for heart-related illness and need to take action to forestall a possible life-threatening event. 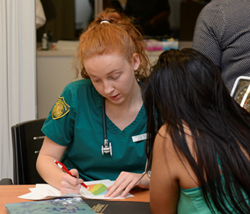 Heart disease is often a silent killer. To offer these screenings, to give women a chance to learn vital information about their heart and seek treatment if necessary, is totally gratifying.

The 2 BigHearts Foundation in conjunction with The Heart Institute at Staten Island University Hospital, held a free heart-health screening and educational forum on February 27 to coincide with American Heart Month. Women from all five boroughs of New York City and New Jersey attended to learn about heart disease — the number-one killer of women in America — and to be screened for potential risk of heart ailments.

Hundreds turned out for the screenings and educational program. Several participants who underwent screening procedures learned that the event could prove to be life- changing. For example, 53-year-old woman from Union, NJ, learned that her laboratory results came back abnormal. "My lab results were on the high side,” she explains, “and it forced me to take immediate action. Had it not been for your event I hate to think of what the outcome could have been. I wasn’t scheduled to visit my primary doctor until October."

A number of other participants were similarly forewarned, thanks to the screenings. A 58-year-old woman from Staten Island set up an appointment with her husband’s cardiologist at The Heart Institute. She expressed, “The main thing that I took away from this event is that I'm just as vulnerable to heart disease as my husband and that it’s time to start paying more attention to my body." The Staten Island resident also believes that it’s imperative for women to get heart screenings. "I suggest women schedule a visit to a cardiologist or clinic for a thorough cardio check because there could be a silent killer lurking within their body.”

“These stories are exactly why we established the 2 BigHearts Foundation in the first place,” states Jim Clarke, Foundation President. The non-profit organization was founded by Clarke, whose wife Gigi, 44, and sister-in-law Sally Czechanski, 49, died on the same day, June 25, 2004, following heart attacks. Both women suffered from previously undiagnosed cardiomyopathy, or enlargement of the heart muscle. The Foundation is dedicated to raising awareness of heart disease in women and provides much-needed heart screenings to women, free of charge. Nearly 2,000 women have received free heart health screening at 2 BigHearts Foundation-sponsored screenings in several states. “Heart disease is often a silent killer. To offer these screenings, to give women a chance to learn vital information about their heart and seek treatment if necessary, is totally gratifying. The data we collect from all of our screenings has produced results that have raised awareness in the medical community that what happened to Gigi and Sally is not as rare a health event as conventionally thought."

The screenings took place in the Regina M. McGinn, MD, Education Center; women availed themselves of a variety of screenings, including A1C HGB blood tests, Ankle Brachial Index, and Electrocardiogram (EKG), as well as Echo Screen.

Joseph T. McGinn, MD, Director of The Heart Institute at Staten Island University Hospital and leader of the cardiothoracic surgery team there, stresses that screenings like the one held by the 2 BigHearts Foundation “Are a vital tool in exposing potential risks to heart health.”

“Among the reasons that heart disease is the number-one cause of death among women is that symptoms often go undetected until there is an actually cardiac event,” Dr. McGinn states. “At the same time, women may overlook subtle symptoms and not want to acknowledge that there might be an issue. Screenings like the one held here at The Heart Institute are extremely important in pulling back the veil on potential heart disease and irregularities. I applaud the 2 BigHearts Foundation for the work they do in this regard.”

Based in Long Beach, IN, the 2 BigHearts Foundation is dedicated to raising awareness of heart disease in women and provides much-needed heart screenings to women, free of charge. To date, the Foundation has arranged for more nearly 2,000 women to receive free heart screenings. For more information on this and future screenings and Foundation activities, visit 2bighearts.org.