Jose Cordeiro, Director of the Venezuelan Node of The Millennium Project has been invited by the Commission of the Future of the Federal Senate of Brazil to discuss Latin America 2030 and to talk about Science & Technology in the coming two decades. 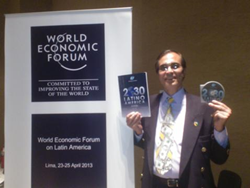 José Luis Cordeiro, Director of the Venezuela Node of The Millennium Project

Brazil to become the country of the future

Brazilian Federal Senators Luiz Henrique and Cristovam Buarque, president and respectively rapporteur of the new Commission of the Future, together with other senators from different permanent commissions, such as the Commission of Education, Culture and Sports have been considering the increasing importance of futures thinking during the next decades. Thus, the Commission of the Future was formally created in 2013, following international examples like Finland (initiated in 1993 but made permanent in 2000) and regional examples such as the Congress on the Future in Chile in 2011.

On April 1-2, 2014, at the invitation of Senator Buarque, Jose Cordeiro, Director of the Venezuelan Node of The Millennium Project will participate to several activities in the federal capital, Brasilia. Besides visiting the University of Brasilia and the Federal Senate, Cordeiro will also present the recent report “Latin America 2030” and will discuss many issues in a public presentation about future technologies at the Antônio Carlos Magalhães of the Federal Senate, followed by a public audience with members of the Commission of the Future. Cordeiro, lead author of “Latin America 2030” launched the report during the World Economic Forum (Davos) for Latin America in Lima, Peru. The book has been praised by prominent leaders in the region, including Mexican President Enrique Peña Nieto, and former Brazilian president Fernando Henrique Cardoso. With an introduction and prologue written by Jose Miguel Insulza (Organization of American States), and Alicia Bárcena (United Nations Economic Commission for Latin America and the Caribbean), the report considers four scenarios for Latin America in the year 2030.

Cordeiro has praised the efforts at the Federal Senate of Brazil for considering long term futures in government planning. Rosa Alegria, Arnoldo de Hoyos and Ladislau Dowbor, Directors of the Brazilian Node of The Millennium Project and founders of the Futures Studies Center at the Catholic University of Sao Paulo, (NEF Nucleo de Estudos do Futuro PUCSP) are open to cooperate with this historical initiative and agree that this a great opportunity for "Brazil to become the country of the future”, particularly with all the international visibility thanks to the World Cup in 2014 and the Olympics in 2016.

The Millennium Project is a global participatory think tank that produces the annual State of the Future report, the Futures Research Methodology series, the Global Futures Intelligence System and related software, and special studies. It has 50 Nodes around the world that identify participants, translate questionnaires and reports, conduct interviews, initiate and conduct special research, workshops, symposiums, and advanced training. The Millennium Project’s mission is to improve thinking about the future and make that available through a variety of media for feedback to accumulate wisdom about the future for better decisions today.

The Federal Senate (Portuguese: Senado Federal do Brasil) is the upper house of the National Congress of Brazil. It was created by the first Constitution of the Brazilian Empire in 1824, it was inspired by the United Kingdom's House of Lords, but with the Proclamation of the Republic in 1889 it became closer to the United States Senate. Currently, the Senate comprises 81 seats. Three Senators from each of the 26 states and three Senators from the Federal District are elected on a majority basis to serve eight-year terms. Elections are staggered so that two-thirds of the upper house is up for election at one time and the remaining one-third four years later.