Toe hits in epee fencing are becoming more and more common requiring the need for a new defense tactic. Academy of Fencing Masters has developed the “Parry-11” technique which turns the vulnerability of the forward foot into a brilliant offensive strategy. 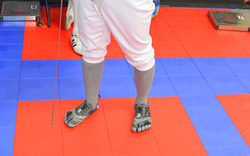 This parry is difficult to master,” says Coach Maximovich, “but those who put in the effort to learn this new technique will benefit tremendously by preventing foot touches.

As fencers know, epee fencing is different from foil and sabre fencing because the whole body is a target and there is no priority - if you are hit, it is a point in your opponent’s favor. Every touch counts toward the final score. Therefore, it is important for the fencer to be able to react quickly and maintain a strong defense. Since it is difficult to defend the forward foot, fencers may strike an unexpected hit there.

Epee fencers have been forced to use their usual defensive repertoire (parry, counter-attack), against these painful toe touches - which doesn’t really provide an adequate defense. There is no specific protection against the foot touch.

“This parry is difficult to master,” says Coach Maximovich, “but those who put in the effort to learn this new technique will benefit tremendously by preventing foot touches.

“The technique is simple, yet powerful. We use the clause in the FIE and USFA regulations that do not put any restrictions on fencing shoes. With this loophole, fencers who want to execute the Parry-11 can elect to fence in 5-toe shoes.”

Here’s how the Parry-11 works:

“There are many nuances in the technique which makes the Parry-11 very difficult to master. For example, one must ensure that the blade is not caught on the tip so that it does not register as a touch for the opponent. This means that the defensive fencer must catch the weapon by the barrel or the blade. Also, it is very important to deliver a counter-attacking touch and release the blade instantly without disarming an opponent.”

Academy of Fencing Masters (AFM) will teach the proper form and technique during the lessons and fencing camps. The AFM coaches and staff are working round the clock to prepare specialty clinics to help fencers develop the skills needed to master the Parry-11. There will be several one-day sessions devoted to this new defense during the Summer National Championship preparations.

To learn more about the Parry-11 defense against toe attacks and other fencing topics, visit the Academy of Fencing Masters blog.

About Academy of Fencing Masters:

Academy of Fencing Masters seeks to develop all level of fencers, from beginners to Olympic athletes, through elite coaches, state-of-the-art facilities, and a supportive community for both the fencer and family. While AFM takes the sport of fencing very seriously, they believe that a sense of humor is healthy for the soul. AFM prepares athletes for fencing and for life.