PinAlerts, a marketing tool for businesses and bloggers, announces a new name to further differentiate itself from Pinterest. Effective April 1, 2014, the website and branding will reflect the new name. 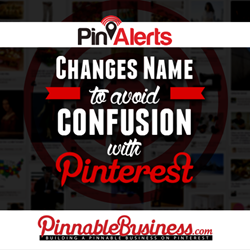 We completely understand why people are confused. Both PinAlerts and this company called Pinterest provide essentially the same thing: amazing services that help businesses visually market to the masses, and we both hoard pictures of beautiful things.

PinAlerts, a wildly popular tool for marketers and bloggers, announced today that the problems plaguing their name since their founding two years ago are finally going to end. The company, often confused with Pinterest (both contain the word pin, leading people to believe that Pinterest is actually PinAlerts), said it was time for a serious change.

"Because we have ‘pin’ in our name and we provide Pinterest alerts for marketers, many people mistakenly confuse us with a company called Pinterest,” said co-founder of PinAlerts, Paul Wilson.

“We completely understand why people are confused. Both PinAlerts and this company called Pinterest provide essentially the same thing: amazing services that help businesses visually market to the masses, and we both hoard pictures of beautiful things,” said Wilson.

The PinAlerts co-founder decided it was time to “push Pinterest out of our shadow and require them to stand on their own. No longer can Pinterest benefit from our well known and well established branding. People must come to know the name Pinterest or allow it to be laid to rest in the crowded graveyard of websites that were almost famous.”

To help Pinterest find its true place on the Internet, PinAlerts asked their users to come up with a name that distinctively shows they are not Pinterest in any way, shape, or form. “We wanted a name that showed the world that we are an innovative company that will continue to lead the visual marketing industry.”

After thousands of submissions and potential ideas, a clear winner was discovered. Ben Paul Sharp from Des Moines, Iowa provided the winning entry with: WANP! & Co., an acronym for "We Are Not Pinterest & Company."

Effective 12:01 am EST, April 1, 2014 PinAlert’s name, website, and all company branding will change to its new name and domain wanp.co. “We strongly feel our new corporate image is distinct and will clearly separate us from Pinterest. With our new name, we feel confident that people on the Internet will no longer be confused.”

Learn more about the future of WANP! & Co. and the amazing people behind it at http://www.WANP.co.