Study: Acyclovir Can Cause Hair Loss; polyDNA Recommends Gene-Eden-VIR, a Natural Herpes Remedy, with no Side Effects

Use of the antiviral drug Acyclovir can cause Alopecia in some cases (alopecia is a loss of hair from the head or body), according to a study published in January 2014 in the Middle East African Journal of Opthalmology (1). polyDNA reviews the study and recommends Gene-Eden-VIR, a safe and effective natural herpes remedy, that was shown to reduce herpes symptoms in a recent post-marketing clinical study. 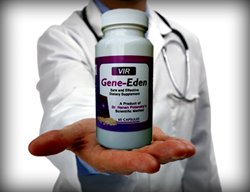 We recommend that individuals, who want to keep their hair, choose Gene-Eden-VIR, a natural antiviral with no reported side effects. - Mike Evans, polyDNA

Acyclovir is an antiviral drug used to slow the growth and spread of the herpes virus. Treatment with oral acyclovir can lead to hair loss (1). “Drug-induced alopecia (hair loss) usually occurs as a diffuse noncicatricial alopecia (a non-scarring hair loss) that recovers after discontinuation of the drug. Drug-induced alopecia occurs as a consequence of a toxic effect of the drug on the hair follicle matrix… in rare cases, alopecia may be permanent (1).” Those who use acyclovir due to its “ease of administration” (See the American Journal of Therapeutics, from March 22, 2013) (2), should consider this side effect. A natural antiviral proven to have no side effects in a post-marketing clinical study that followed FDA guidelines is Gene-Eden-VIR.

Acyclovir has other side effects. These include neuropsychiatric effects, tremors, visual and auditory hallucinations, confusion and coma. (See the Journal of Antimicrobial Chemotherapy, from March 15, 2006) (3). Drugs.com reports even more side effects, such as “abdominal or stomach pain, decreased frequency of urination or amount of urine, increased thirst, loss of appetite, nausea or vomiting, unusual tiredness or weakness.” (See Drugs.com, updated March 13, 2014) (4)

In addition, a meta-analysis of scientific studies found that “five placebo-controlled and two dose comparison studies evaluated the effect of aciclovir… on symptoms. The meta-analysis showed that oral antiviral therapy decreases the duration and the associated pain of an (genital herpes) outbreak by merely one day.” (See Pharmacology & Pharmacy, from September 2013) (5).

Due to the many potential side effects associated with oral acyclovir and its limited efficacy, polyDNA recommends that infected individuals ask their doctor about Gene-Eden-VIR. This natural antiviral helps the immune system target the latent herpes virus. Acyclovir is a chemical drug; while Gene-Eden-VIR is natural.

“We recommend that individuals, who want to keep their hair, choose Gene-Eden-VIR, a natural antiviral with no reported side effects.” - Mike Evans, polyDNA

A study published on August 12, 2013 in the peer reviewed, medical journal Pharmacology & Pharmacy, in a special edition on Advances in Antiviral Drugs, showed that Gene-Eden-VIR reduced herpes symptoms. Study authors wrote that, “Individuals infected with the herpes virus… reported a safe decrease in their symptoms following treatment with Gene-Eden-VIR (5).” The study authors also wrote that, “We observed a statistically significant decrease in the severity, duration, and frequency of symptoms (5).”

To read the study on the antiviral nature of Gene-Eden-VIR, visit:http://www.scirp.org/journal/PaperInformation.aspx?PaperID=36101#.UzPvtaiSz90.

To read the study on Gene-Eden-VIR’s effects on reducing physical and mental fatigue, visit:http://www.scirp.org/journal/PaperInformation.aspx?PaperID=44234#.UzPwAqiSz90.

To learn more about Gene-Eden-VIR, and the herpes virus, visit http://gene-eden-kill-virus.com/Herpes-Remedy.php. All orders of Gene-Eden-VIR are completely confidential, and no information is shared or sold to any third party. Privacy is assured.

(3) The aciclovir metabolite CMMG is detectable in the CSF of subjects with neuropsychiatric symptoms during aciclovir and valaciclovir treatment. Published on March 15, 2006.
http://jac.oxfordjournals.org/content/57/5/945.long