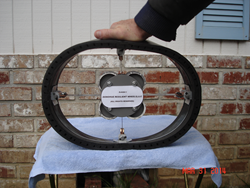 Exhibit I: A Wheel & track Combined.

Donohue Resilient Wheels, LLC shows the capacity of its resilient wheel technology with prototypes of future wheels. They can widely broaden their contact with the terrain, absorb shock, flex/swivel transversely, and horizontally shift their load bearing upon the ground.

This technology is not limited to the models presented. The desired performance of the wheel is a reflection of the "selection of parameters" chosen to build it. In general, these functional mock-ups demonstrate means for attachment either centrally or through the cylindrical pivots of the hub, a spoke hinge designed with fail-safe* in mind and capable of universal action, and a rim/tire easily removable with a small Allen wrench.

Exhibit I: Displays a mid-size wheel with a relatively small hub. Notice that the spoke hinges alternate between singular and universal swivel action, upon the dual steel bands of the tire. *Each spoke hinge consist of a metal channel with a steel rim band(s) riding within and held in place by an assembly of screw fasteners and a concave washer. They are restricted from removal by a crossover, threaded pin (axle) directly above.

Exhibit II a: Features a full-size wheel with a relatively large hub. Notice that the cylindrical pivots have positioned holes which facilitate access for fastening the hub onto the “hub assembly of an axle”. This wheel has an offset rim to partially accommodate the wheel bearing.

Exhibit II b: Features a smaller hub having four stationary tubular axles, which allow access for fastening onto the “ hub assembly of an axle”. The revolving cylindrical pivots act as sleeves encompassing them.

This announcement is meant to encourage the future development and adoption of this technology. Visit DonohueResilientWheels.com for the display of six spoke, resilient wheels soon to follow.