Autism Society of North Carolina Raises Over $26,000 in One Day for Camp Scholarships

"Send a Kid to Camp" campaign aims to raise $200,000 during April to enable more individuals with autism to attend Camp Royall this summer. 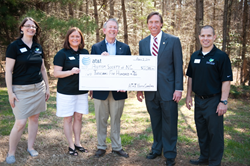 The Autism Society of North Carolina (ASNC) raised more than $26,000 on Wednesday, April 2, as it launched a campaign to enable more individuals with autism to attend summer camp this year.

The “Send a Kid to Camp” campaign aims to raise $200,000 for scholarships to Camp Royall, the nation’s oldest and largest camp for individuals with autism. The campaign continues throughout April, which is Autism Awareness Month. For those who have autism, a week at summer camp can give them a chance to make their first friend or learn to swim. Because the camp is structured to meet the unique needs of individuals with autism, with highly trained counselors working one-on-one with campers, the actual cost per camper is $1,700.

The campaign’s launch was part of a World Autism Awareness and Acceptance Day celebration attended by more than 500 people at Camp Royall near Pittsboro. Families enjoyed a day of fun activities and camaraderie with others in the autism community.

AT&T jumpstarted the “Send a Kid to Camp” campaign with a $2,500 contribution presented by Jim Tarman, Regional Director of External Affairs. He was accompanied by state Sen. Rick Gunn (R-Alamance). “It is incredible to see the work done at Camp Royall and consider how this one experience can literally be a life-changer for the participants,” Gunn said. “The caring and commitment of the staff and volunteers are truly extraordinary. I am thrilled that even more young lives will be touched, and families helped, in the future as a result of this scholarship program.”

Premiere Communications and Consulting helped push the campaign over its $10,000 goal for Wednesday as employees donated $2,500 and the company matched with another $2,500.

Opened in 1997, Camp Royall is a 133-acre facility that also provides year-round programs, such as afterschool care and weekend retreats, for people on the autism spectrum. In 2013, more than 1,100 people participated in programming through Camp Royall.

“For more than four decades, the Autism Society of North Carolina has been working to address areas of need and expand services for the autism community,” said Tracey Sheriff, Chief Executive Officer. “Part of the magic of Camp Royall is that it not only helps campers learn new skills, but it provides an opportunity for the campers’ families to recharge physically and emotionally through a much-needed break.”

ASNC works to directly improve the lives of individuals and families affected by autism through advocacy, training and education, and direct services. As the only autism-specific advocacy organization in North Carolina, ASNC provides support for families and a voice for individuals with autism.