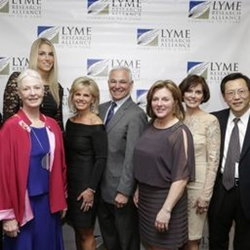 We are, and will always be, committed to a cure.

They were joined at the Gala, the signature annual event for LRA, the nation’s largest nonprofit funder of university-level research into Lyme and other tick-borne diseases, by U.S. Senator Richard Blumenthal, First Selectman of Greenwich Peter Tesei, prominent business leaders and high-impact philanthropists. Film and stage actor Peter Sarsgaard wrote a special message about his experience with Lyme disease which was printed in the evening’s program.

“It was an absolutely wonderful evening,” said Debbie Siciliano, LRA co-founder and co-president. “We are so grateful to those who made our Gala such a spectacular success, particularly our special guests and the many supporters of LRA whose dedication to advancing Lyme disease research is extraordinary.” The event was attended by about 400 people and raised over $1 million to support LRA’s efforts to fund urgently needed medical research.

The event was emceed by Fox News Channel personality Carlson. In her heartwarming opening comments, the Greenwich resident talked about her experience with Lyme, including the lack of a reliable diagnostic test. “I had a bulls-eye rash, but I was told I didn’t have Lyme disease,” she said.

Honored at the event was Elena Delle Donne, the Chicago Sky basketball superstar, who received LRA’s Star Light Award for stepping forward as a role model for young people struggling with Lyme disease and raising awareness. Delle Donne, the WNBA’s reigning Rookie of the Year, was loudly applauded when she said she believes Lyme disease “found me for a purpose,” alluding to the good she has subsequently been able to do for those afflicted.

First diagnosed with Lyme disease seven years ago, the forward-guard recounted how her Lyme disease was falsely diagnosed by several doctors before she found a Lyme specialist. “But think of how many people are still on the diagnosis odyssey,” the 24-year old told attendees. “Right now they're being treated for depression or chronic fatigue and if they ever get properly diagnosed and treated for Lyme it may be too late.” (Lyme is usually successfully treated with antibiotics when caught early, but can cause serious and debilitating problems if treatment is delayed.)

The 6’5” Delle Donne shared the heartwarming story of meeting a five-year old who had been battling Lyme and other co-infections for over a year and who hated taking all her “yucky pills.”

“I told her I don’t like taking my pills either but they keep me strong so I can still play basketball,” said Delle Donne. “So at that moment she reached out and asked me to make a pill pact. We both made a promise that we would take our pills for each other. Now when I go to take my handful of pills I'm reminded of her and it makes my monotonous routine not so bad anymore. I hope she is feeling the same.”

Delle Donne promised she would continue sharing her story in hopes she can “inspire a fellow Lymie who may feel like giving up.” She also pledged to help any way she can to “find a cure not for myself but for that 5-year old girl staring at a handful of ‘yucky pills.’”

Prior to Delle Donne receiving her award, distinguished Lyme disease researcher Ying Zhang, M.D., Ph.D., of Johns Hopkins Bloomberg School of Public Health received the Lauren F. Brooks Hope Award for his progress researching “persister” cells that manage to survive antibiotic assault. Kim Lewis, Ph.D., of Northeastern University, was also honored for his research with persisters, though he was unable to attend.

In addition to the Gala, on Saturday morning LRA hosted its fifth annual closed-door Lyme Research Symposium for members of the scientific community who are either current LRA grant recipients or members of LRA’s Scientific Board.

Diane Blanchard, LRA’s co-founder and co-president, told the Gala audience that the LRA conducts the peer-to-peer scientific forum for researchers to share their ideas and their research. “We are, and will always be, committed to a cure,” she said.