Emmylou Harris is one of the Celebrity Ambassadors who support Best Friends Animal Society's http://bestfriends.org call to action: Save Them All®. 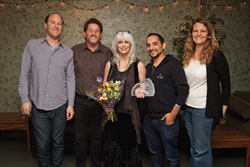 Emmylou Harris is a longtime friend to animals in need, exemplifying the Best Friends spirit that every pet deserves a second chance.

Music legend Emmylou Harris is also a tireless advocate on behalf of dogs and cats; recently she was given an award in appreciation of her work by national animal welfare organization Best Friends Animal Society.

Harris kicked off her 2014 tour with a concert at the Wiltern Theatre in Los Angeles. Following the concert, Marc Peralta, executive director of Best Friends – Los Angeles, presented her with an award in appreciation on behalf of animals in need, including her support for Best Friends, her work with Crossroads Campus as well as for her own animal rescue, Bonaparte’s Retreat.

"Emmylou Harris is a longtime friend to animals in need, exemplifying the Best Friends spirit that every pet deserves a second chance. Emmylou has given many dogs and cats that second chance at a great new life and is a powerful ally in the fight to Save Them All," Peralta said.

Harris is one of the Celebrity Ambassadors who support Best Friends’ call to action: Save Them All® . According to national statistics, each day more than 9,000 dogs and cats die in the nation’s shelters. Best Friends has brought increased awareness to how people can get involved in the solution by adopting, and spaying/neutering their pets, donating, volunteering and sharing this message with their friends.

About Best Friends Animal Society®
Best Friends Animal Society is the only national animal welfare organization focused exclusively on ending the killing of dogs and cats in America's shelters. An authority and leader in the no-kill movement since its founding in 1984, Best Friends runs the nation's largest no-kill sanctuary for companion animals, as well as life-saving programs in partnership with rescue groups and shelters across the country. Since its founding, Best Friends has helped reduce the number of animals killed in shelters from 17 million per year to about 4 million. Best Friends has the knowledge, technical expertise and on-the-ground network to end the killing and Save Them All®.