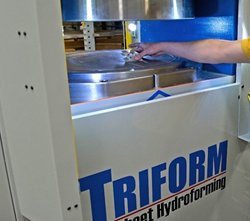 'The addition of the 24-5BD definitely makes forming those parts much easier,' said Joseph Dust of Steelville Manufacturing.

Located in Steelville, Missouri, USA, Steelville Manufacturing Co. is a contract machine shop specializing in milling, turning, waterjet cutting and metal forming which has been in business since 1959. Primarily focused on the aerospace industry, Steelville Manufacturing Co. is a supplier to Boeing, Lockheed Martin and Sikorsky, among other aerospace OEM’s. Steelville approached Beckwood Press Company to help improve their internal forming capability and efficiency via the addition of Triform Sheet Hydroforming equipment, which is manufactured in St. Louis, MO USA.

Prior to receipt of their new Triform press, Steelville was press brake forming their parts, in addition to forming parts using both solid rubber blocks and traditional matched die sets. Alternatively, the flexible diaphragm of the Triform automatically takes the shape of any form block used and acts as a ‘universal’ die half, thereby eliminating the need for expensive and hard-to-manufacture mating dies. This ‘cheap tooling’ can be made from traditional materials like machined steel and aluminum, but also with alternative materials such as poured epoxies, 3D-printed materials and even wood.

Delivered in March, 2014, the Triform 24-5BD is already having a positive impact on Steelville’s manufacturing operations.

“We had been forming parts for years which we now know were tailor-made for the Triform,” said Joseph Dust, Steelville Manufacturing Co.’s engineer in charge of the Triform’s integration. “The addition of the 24-5BD definitely makes forming those parts much easier,” continued Dust. “With the Triform, the overall time required to make our form tools has been cut in half. Within the first two weeks of having the press on our floor, we’d already moved over 10 parts which are now being formed using the Triform process,” he added.