The Rev. Paul J. Fitzgerald, S.J. has been named the next president of the University of San Francisco, the 28th in its 159-year history. The USF Board of Trustees voted unanimously in a special session April 8 to appoint Fr. Fitzgerald, said Thomas E. Malloy, board chair. 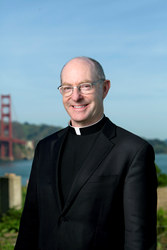 The University of San Francisco’s Board of Trustees voted unanimously to elect the Rev. Paul J. Fitzgerald, S.J. as USF’s 28th president during a special meeting of the board earlier today. He will take office on Aug. 1, 2014.

Fr. Fitzgerald has worked in higher education for more than 20 years, and is currently the Senior Vice President for Academic Affairs at Fairfield University in Connecticut, where he oversees the recruitment and retention of faculty, develops curriculum, and works with deans to direct academic programs.

At Santa Clara University, Fr. Fitzgerald was associate dean and senior associate dean for the College of Arts and Sciences. He has also served on several university boards, including the Ecclesiastical Board of the School of Theology and Ministry at Boston College, the Board of Trustees of Loyola University Chicago, and the Board of Trustees of Loyola Marymount University in Los Angeles. Through a number of teaching and leadership positions, he has gained a deep understanding of Jesuit education.

“When I received word I was selected as president, I was absolutely elated,” Fr. Fitzgerald said. “USF has an impressive legacy. The chance to contribute to this environment of learning and service is a true honor.”

For Fr. Fitzgerald, this is a homecoming. He grew up in Los Gatos, Calif. after his family moved from Southern California when he was 5. He earned a bachelor’s degree in history from Santa Clara University in 1980, and entered the Society of Jesus two years later. Fr. Fitzgerald was ordained to the priesthood at St. Ignatius Church on the USF campus in 1992.

He gained first-hand knowledge of the Silicon Valley during his 12 years at Santa Clara University, and plans to invest personal time and energy engaging the Bay Area’s burgeoning technology community. Fr. Fitzgerald understands that the Silicon Valley is moving north and that the City of San Francisco is a vibrant center for startups, venture capital, and related industries.

“We believe Fr. Fitzgerald is ideally suited to work with the entire USF community in delivering a Jesuit education to the next generations of USF students,” said Thomas E. Malloy, chair of the USF Board of Trustees. “He has a strong commitment to diversity, brings a global perspective, and is an enthusiastic supporter of intercollegiate athletics. He is excited about leading San Francisco’s first university and expanding our partnerships with the community.”

“This process has been thorough, intentional, and wide in scope,” said Smith. “We proactively sought top tier candidates from across the nation, and President-elect Fitzgerald stood out among an exceptional pool of applicants. First and foremost, we know he will sustain and advance the university’s Jesuit mission and identity. He has a sound working knowledge of the mechanics of higher education and the use of technology to complement the transformative one-on-one interaction between faculty and students.”

Fr. Fitzgerald is fluent in German and French and is conversational in Spanish. He lived, taught, and studied overseas, which helped shape his global understanding. As a visiting lecturer, he taught in China during the summer of 1992 and in Kenya in 2004. Fr. Fitzgerald attended the University of Paris—La Sorbonne, where he earned a D.E.A. (diplôme des études approfondies) and a Docteur ès Lettres (PhD) in the Sociology of Religion. Concurrently, he worked toward and received an S.T.D. (Pontifical Doctorate) in ecclesiology from the Institut Catholique de Paris.

Fr. Fitzgerald succeeds Stephen A. Privett, S.J., who has served as USF’s president from 2000 to 2014—making him the third longest serving president in university history. Fr. Privett will ensure the president-elect’s smooth transition by staying in office until Fr. Fitzgerald is settled in San Francisco.

About the University of San Francisco
The University of San Francisco is located in the heart of one of the world's most innovative and stunning cities and is home to a vibrant academic community of students and faculty who achieve excellence in their fields. Its diverse student body enjoys direct access to faculty, small classes, and outstanding opportunities in the city itself. USF is San Francisco's first university, and its Jesuit Catholic mission helps ignite a student's passion for social justice and a desire to “Change the World from Here.” For more information, please visit http://www.usfca.edu.