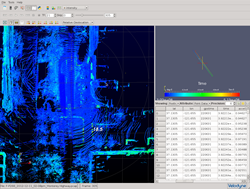 Interested individuals and companies can base their customized application software on the already existing open-source libraries without having to start from scratch.

Kitware and Velodyne are pleased to announce the release of VeloView 2.0. The release will occur at the SPAR International 3D Measurement & Imaging Conference, which will be held from April 14 to April 17, 2014, in Colorado Springs, Colorado.

VeloView is a free open-source application built on ParaView technology. It is designed for the visualization and analysis of point cloud data generated by the Velodyne HDL-64E and HDL-32E LiDAR sensors. In addition to performing real-time and 3D visualizations of data captured live, VeloView can play back pre-recorded data.

New in version 2.0 is the ability to record and display position packets. This capability is useful when a high accuracy GPS/IMU device is connected to the LiDAR sensor for geo-referencing. To indicate the path traveled, a “map” feature plots GPS waypoints on screen.

Additional features in version 2.0 include a ruler for distance measurements in 2D, a plane fit tool, a laser selection tool, and the ability to show sequential data in one display.

“Interested individuals and companies can base their customized application software on the already existing open-source libraries without having to start from scratch,” Casey Goodlett, lead developer of VeloView at Kitware, said. “This will help eliminate programming errors and save software development time, thereby making data collection more productive.”

The development of VeloView is a collaborative effort between Velodyne’s LiDAR divison and Kitware. VeloView 2.0 and its source code can be downloaded at http://www.paraview.org/Wiki/VeloView.

To learn how Kitware can develop custom scientific visualization and analysis applications for your data, please visit http://www.kitware.com/scientific.html.

About Kitware
Kitware is an advanced technology, research, and open-source solutions provider for research facilities, government institutions, and corporations worldwide. Founded in 1998, Kitware specializes in research and development in the areas of visualization, medical imaging, computer vision, quality software process, data management, and informatics. Among its services, Kitware offers consulting and support for high-quality software solutions. Kitware is headquartered in Clifton Park, NY, with offices in Carrboro, NC; Santa Fe, NM; and Lyon, France. More information can be found on http://www.kitware.com.

About Velodyne LiDAR
Founded in 1983 and based in California’s Silicon Valley, Velodyne, Inc. is a diversified technology company known worldwide for its high-performance audio equipment and real-time LiDAR sensors. The company’s LiDAR division evolved after founder and inventor David Hall competed in the 2004-05 DARPA Grand Challenge using stereovision technology. Based on his experience during this challenge, Hall recognized the limitations of stereovision and developed the HDL64 high-resolution LiDAR sensor. More recently, Velodyne has released its smaller, lightweight HDL 32E sensor, available for many applications including UAVs. Since 2007, Velodyne’s LiDAR division has emerged as a leading developer, manufacturer and supplier of real-time LiDAR sensor technology used in a variety of commercial applications including autonomous vehicles, vehicle safety systems, 3D mobile mapping, 3D aerial mapping and security. For more information, visit http://www.velodynelidar.com. For the latest information on new products and to receive Velodyne’s newsletter, register here.