Jada Stevens will be at the New Century on Friday April 11 and Saturday April 12. 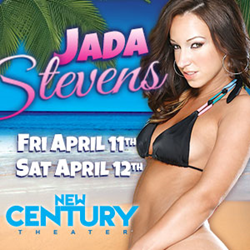 Interested in meeting a real live adult star? How about one of the hottest stars in the adult film industry? New Century Theater is excited to announce that adult film star Jada Stevens will be performing live on Friday, April 11 and Saturday, April 12. All fans and interested guests are invited to attend.

“We are excited to welcome Jada Stevens to New Century Theater,” said Axel Sang, director of marketing for BSC Management. “New Century Theater consistently showcases only the hottest girls in the adult film industry and features them at the club for their guests to meet.”

Attendees of the event will have the opportunity to meet and take pictures with the beautiful actress. Jada Stevens is an award winning American pornographic actress from Snellville, GA. She quickly made a name for herself in the adult film industry and has now starred in more than 200 films.

New Century is inviting all of their guest to come on down and meet the sexy Georgia peach with the bodacious body. In addition to being available for meet and greets, Stevens will perform two live all-nude shows both nights. This is an event that not to be missed!

To learn more about Stevens’ visit and New Century Theater’s other upcoming events, visit them online.

Boilerplate/About Us: Step into and experience the feel of a New Century. Enjoy beautiful women in non-stop stage shows. New Century Theater is San Francisco’s number one bachelor and bachelorette party specialists. Guests can enjoy the company of the woman (or women) of their dreams into any of the private theme rooms, or go to any of the spacious VIP rooms for the ultimate in exclusive private experience. New Century also accommodates large parties or groups. New Century Theater is open seven days a week from 7 p.m. – 5 a.m. For more information about the fully-nude strip club, call 415-776-0212.