VibrAlign, Inc., US distributor of Fixturlaser and Hog Brand shaft alignment systems, is proud to announce that the new Fixturlaser NXA Pro was selected by Plant Engineering Magazine to receive the 2013 Bronze Product of the Year award in the Maintenance Tools & Equipment category. The Fixturlaser NXA laser alignment system features many innovations in shaft alignment, including the first use of gyroscopes, improved power management with extended battery life, a new display unit with a 6.5inch touch screen with video game style realistic graphics, and includes a completely redesigned set of super slim transmitter/detectors. 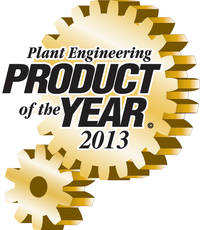 The Fixturlaser NXA laser shaft alignment system and its U.S. distributor VibrAlign have been named the Bronze 2013 Product of the Year in the Maintenance Tools and Equipment category. The NXA won out over other nominees based on voting by readers of Plant Engineering magazine. Fixturlaser and VibrAlign have previously won Product of the Year Gold awards in 1992 (CombiLaser) and in 1998 (V180), a Silver award in 2008 (Fixturlaser GO), a Bronze award in 2006 (Fixturlaser XA), as well as being nominated as a Finalist for the XA Upad in 2010.

David Zdrojewski, VibrAlign CEO, said of the nomination, “I was honored to be able to attend the awards dinner in Chicago and personally receive the Product of the Year award. The award reflects the years of planning and development that went into the NXA Pro, and showcases Fixturlaser’s innovative design and manufacturing capabilities.”

The new Fixturlaser NXA Pro was designed to give alignment practitioners greater ease of use, long battery life to get them through the work day, and a screen display that can change in real time to always show the machine being aligned from the same viewing angle as seen by the operator. No other laser alignment system can do this.

About VibrAlign
VibrAlign is celebrating its 30th year, having started in 1983 as a vibration and alignment service organization and later became a distributor of equipment which, appropriately, equipped our team to better serve. VibrAlign is America’s exclusive distributor of Fixturlaser® – the manufacturer of the new Fixturlaser NXA Pro. For thirty years now, VibrAlign has been growing across the country. Today the company operates out of local offices in every major region.