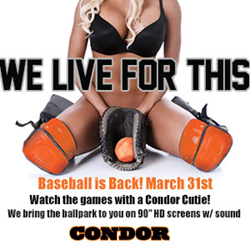 Condor welcomes all baseball fans and provides them with great food, great drinks and fantastic entertainment!

Condor Club is ready to root, root, root for the home team! Baseball season is underway, and the San Francisco gentleman’s club is inviting fans to come watch the games and enjoy all new specials on ballpark themed food and drinks.

The spirit of the ballpark is never far away at Condor Club. During all baseball games this season, fans can enjoy all their ballpark snack favorites. Condor Club has $9.95 draft beer and wings, $2 ballpark hot dogs, $3 draft beers and $5 specialty drinks. For those who can’t make it to the games in person, this is the next best thing!

“It doesn’t matter if you’re a fan of the Giants, Athletics, or any other team,” said Axel Sang, director of marketing for BSC Management. “Condor welcomes all baseball fans and provides them with great food, great drinks and fantastic entertainment.”

Condor is screening baseball games on 90-inch HD screens with sound. The games are guaranteed to look better on Condor’s big screen televisions than on any television fans have at home. Plus, fans can watch the games with one of the gorgeous Condor Cuties. Fans won’t find that opportunity at home or the ballpark!

Condor Club is the number one place to go to watch baseball this season. Come in and enjoy your favorite teams game in the company of a Condor Cutie!

Boilerplate/About Us: Condor is San Francisco’s original gentleman’s club. In 1964, they became the first topless club in the United States. Since then, they have provided the Bay Area with quality adult entertainment and superior service. The club features a VIP lounge, champagne rooms, bottle service, topless dancing and concierge services, all in an effort to provide their customers with a special and exclusive experience. Everyone is sure to have a good time at Condor. With live music, a full bar and restaurant and topless adult entertainment, there’s no better gentleman’s club around. Condor Gentleman’s Club is open 6 p.m. – 2 a.m. Monday through Wednesday and 12 p.m. – 2 a.m. Thursday to Sunday.