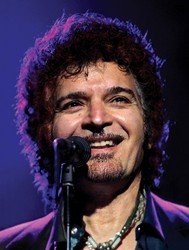 "Jazz on the mountain is just that - Jazz concerts set on Blue Mountain, plus we'll have free concerts all weekend long our outdoor stage, and a late night series in our bars & restaurants." Patti Kendall, Marketing Director Blue Mountain Village.

Returning for a second year, Jazz on the Mountain at Blue includes a full weekend with over thirty concerts and 100 musicians. Free and ticketed outdoor shows from Canadian and international artists offers an amazing musical festival in the heart of Blue Mountain Village, just 2 hours north of Toronto. The 2014 Festival includes the exciting headliner line-up with iconic pop and jazz singer Gino Vannelli , the incredible R&B group The Commodores and respected contemporary jazz champions the Yellojackets. Also new for 2014 is ART&JAZZ @ BLUE, a spectacular collection of visual and tactile artwork featuring music and jazz related themes.

Opening the festival Friday night will be veteran Gino Vannelli who has sold more than 10 million records over four decades. This is Gino Vannelli's much-anticipated first concert in Ontario for 2014. The award-winning singer and songwriter is best known for hits such as Black Cars, I Just Wanna Stop, Wheels of Life, Appaloosa and Wild Horses. Along with several Juno wins over his career, Vannelli has also received four Grammy nominations.

Saturday night on the main stage will feature the legendary The Commodores. Renowned for the R&B hits "Just to Be Close to You," "Easy," and "Brickhouse," to name but a few, Commodores were one of the top bands during their long tenure at Motown. The group is credited with seven number one songs and a host of other Top Ten hits on the Billboard charts, and their vast catalog includes more than 50 albums.

Closing out the festival on Sunday afternoon will be the Grammy award winning group the Yellowjackets. Founded in 1981 as an R&B-oriented band that starred guitarist Robben Ford, the group took a giant step forward when, after Ford's departure, altoist Marc Russo took his place. With original members Russell Ferrante on keyboards and electric bassist Jimmy Haslip, in addition to drummer William Kennedy, the band found its own R&B-ish sound.

About Jazz on the Mountain at Blue
In its inaugural year, the festival attracted thousands of visitors to Blue Mountain Village. The Village is nestled between the UNESCO World Biosphere reserve the Niagara Escarpment and the sparkling shores of Georgian Bay, often referred to as Canada’s 6th Great Lake. Blue Mountain is the perfect backdrop to experience all that jazz has to offer with a pedestrian-only village with stone pathways connecting the resort’s plazas and squares, more than 40 shops, restaurants and bars, patios overlooking the stage, and a vast range of accommodations. Visitors to Jazz on the Mountain at Blue can enjoy the music, an amazing array of amenities and attractions, and the endless choice of family activities provided by Ontario’s favourite mountain playground.

For more information about the concert and events schedule, artist bios, and details about ticket purchasing, accommodations, promotions, and merchandise visit http://www.bluemountainjazzfest.com.