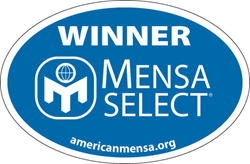 Mensa Select games are challenging, creative, and most importantly, fun!

250 judges, 56 competitor games, and forty-four hours of nonstop board game action later, five games claim bragging rights as Mensa Select® winners. Lone Star Mensa hosted this year’s event in Austin, TX. Members of American Mensa, the high IQ association, selected five Mensa Select winners at its 2014 Mind Games event. Out of the 56 entries in this year’s competition, only these five will have the honor of displaying the coveted Mensa Select® seal. This year’s Mensa Select games are:

“Mensa Select games are challenging, creative, and most importantly, fun,” said Greg Webster, Chief Judge of this year’s Mind Games event. “We are so excited to be some of the first people to play these games and be able to share our insights with other board game fans.” To find out about the competing games and the winners, visit mindgames.us.mensa.org.

American Mensa is an organization open to anyone who scores in the top 2 percent on an accepted, standardized intelligence test. Mensa has more than 56,000 members in the United States and more than 110,000 members globally. For more information about Mensa, visit americanmensa.org or call (800) 66-MENSA.