As Mali’s government struggles to regain normalcy two years after a military coup and extremist violence plunged the country’s north into chaos, Caravan to Class tackles one factor that left Mali vulnerable – education. 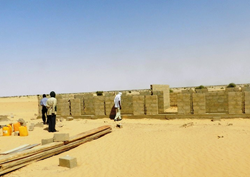 The best way to fight against terrorism and extremism is a simple thing, educate the next generation. - Malala Yousafzai

Most Malians, along with the international community, viewed the 2013 presidential win of Ibrahim Boubacar Keita (“IBK”) with hope – that the government can rebuild stronger and with less corruption following the country’s worst political and humanitarian crises since gaining independence in 1960. However, the slow progress since his September inauguration reveals how lingering the fallout and how difficult the recovery from the occupation that northern Mali underwent.

Prior to the 2012 conflict, Mali was overall a tolerant, hospitable country where many different ethnic groups cohabitated and the 98% Muslim population had absorbed traditional animist practices into Islam. This reunifying period is a crucial time to invest in Mali’s underdeveloped north, and protect Mali against takeover by extremists imposing a violent shar’ia.

March and April saw progress in the north with fruitful peace talks attended by all northern ethnic groups including Tuareg rebels, and the reconstruction of UNESCO World Heritage mausoleums damaged during the extremist occupation. However, Mali’s economy has gone largely without tourism dollars for more than two years, some children have been out of school for just as long, electricity is still unstable in the north and some refugees remain hesitant to return home.

As governments struggle to sort out the politics, Caravan to Class, an American nonprofit that seeks to enable literacy for underserved children, sees education as a primary factor in reunifying the country. Education can fundamentally influence the “poor economies, weak state security and anger at ‘corrupt governing elites’” that Islamist extremists capitalized upon.

In a May 2013 interview, Malian religious leader Shiekh Thiermo Thiam, head of the Sufi Tidjania sect, said, "We need a stable government, a functioning democracy and an end to illiteracy so that people can actually read the Qu'ran for themselves. Our Islam needs to continue to be an Islam of tolerance or we will all be pushed towards violence."

A loaded example of the empowerment that education represents, especially for women, is revealed in the October 2012 assassination attempt of Malala Yousafzai. The Taliban attempted to silence the then-15-year-old Pakistani girl who spoke out for education for all, but the tragic event and her miraculous recovery only amplified her wise message for a worldwide audience.

No one thought the Taliban would harm a child due to the local Pashtun belief that children must always be spared from harm, but the Tehrik-I-Taleban Party claimed responsibility for the attack calling Malala “a clear sinner” and a spy who had defied Pashtun tradition and shari’a. They viewed her outspoken advocacy for education as that significant of a threat. In a 2013 Special Edition of 20/20, Diane Sawyer stated, “The greatest threat to the Taliban is not American drones, it is girls like Malala.”

In an October 2013 interview with BBC News, Malala stated, “The best way to fight against terrorism and extremism is a simple thing, educate the next generation.” Her view appears increasingly relevant with the kidnapping earlier this month of 129 schoolgirls in Chibok, Nigeria by Boko Haram, an extremist group that denounces Western education.

Despite being a major center of literacy and learning from the 13th through 16th centuries, Timbuktu remains underdeveloped without any universities or a good road to the capital, Bamako (1,000 kilometers away by car). Timbuktu sits above the Niger River, where semi-arid Sahelian savannas stretch northward into Saharan sands. Here, nomadic Tuaregs have traded goods via camel caravans for generations. As this way of life diminished due to more modern transport modes, droughts and loss of herds, Tuaregs and other northern populations settled in villages around Timbuktu, but never knew formal schooling or received educational support from the Malian government.

This is where Caravan to Class focuses its operations. It builds safe, welcoming school buildings; provides meals for students; and works with local partners, including the Timbuktu Ministry of Education, to create sustainable educational infrastructures. Its efforts reach hundreds of students, many of whom are the first generation in their families to be literate. The organization is currently rebuilding a school in the village of Tombouz that was damaged during the Islamist occupation, and planning to reopen to 120 students by late May.

After the turmoil that Malians have experienced, public attitudes both of optimism and conviction are increasing. They are no longer afraid of extremist groups such as Ansar Dine, but fed up, ready to protest and stand for their opinions. This push for progress is illustrated at Bamako’s Conservatory of Arts and Multimedia Balla Fasseke Kouyate, one of Africa’s few visual and performing arts schools. It remained open during the 2012-2013 conflict despite many foreign teachers fleeing the country, with graduate students taking over the classes. Artistic director Abdoulaye Konaté states:

“People all over the world are afraid of fanatics who want to impose ideas which don’t correspond with the realities of the 21st century. I also believe that their ideas don’t correspond at all with the realities of the different religions. It’s true that they were a threat to our school but also to culture in general. However in spite of their arrogance and their fanaticism our ancestral culture will persevere and will continue to live. They can sometimes attack us to try to frighten us but I don’t think they will conquer the world because social evolution, cultural evolution, intellectual evolution and scientific evolution will not allow terrorism to install itself anywhere in the world.”