The American Journal of Managed Care launches its fourth tile in the "Evidence-Based Series" with a look at the status of the search for a vaccine against HIV, a discussion of the challenges in paying for breakthrough therapies for hepatitis C, and a review of what's now known about rheumatoid arthritis. 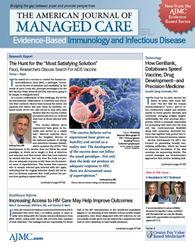 The challenges in immunology and infectious disease are enormous. While the scientists marvel at the discoveries, those who manage healthcare and prescription plans are asking, 'Who is going to pay for it?'

Anthony Fauci, MD, now in his 30th year as director of the National Institute for Allergy and Infectious Diseases (NIAID), joined leading AIDS researchers to discuss the search for a vaccine to stop the spread of HIV in the inaugural issue of Evidence-Based Immunology and Infectious Disease,the fourth title in the news series published by The American Journal of Managed Care.

The story, “The Hunt for the ‘the Most Satisfying Solution,’” is among the highlights in the issue, which includes coverage on the challenges of funding breakthrough treatments for hepatitis C, as well as new information on causes and treatment for rheumatoid arthritis.

“The challenges in immunology and infectious disease are enormous – while the scientists marvel at the discoveries, those who manage healthcare and prescription plans are asking, ‘Who is going to pay for it?’”said Michael J. Hennessy, Chairman of The American Journal of Managed Care. “No one else can bring stakeholders together the way we can, and we are proud to present this first issue of Evidence-Based Immunology and Infectious Disease.”

“The most satisfying solution,” is Fauci’s own description of the emerging HIV vaccine, and writer Tracey L. Regan takes readers along for the tale of how scientists are arriving there. While Fauci and others praise the advances in AIDS treatment, researchers who spoke with EBIID believe prevention through a vaccine remains the ultimate goal. A separate story highlights the prospects for broader availability of treatment in the United States, due to the Affordable Care Act.

Scientists featured in EBIID include:

Scientists spoke of the many highs and lows in the search for an HIV vaccine. A bright spot has been cooperation among scientists, which has helped point the field toward what will ultimately work. “The vaccine failures we’ve experienced have given us humility and served as a reality,” said Fauci, who received the Presidential Medal of Freedom from President George W. Bush for his work in combatting AIDS and HIV.

EBIID also covers controversies surrounding the overuse of antibiotics in both humans and livestock, which have led to resistance and “superbugs.” Features include:

The American Journal of Managed Care, now in its 20th year of publication, is the leading peer-reviewed journal dedicated to issues in managed care. In December 2013, AJMC launched The American Journal of Accountable Care, which publishes research and commentary devoted to understanding changes to the healthcare system due to the 2010 Affordable Care Act. AJMC’s news publications, the Evidence-Based series, bring together stakeholder views from payers, providers, policymakers and pharmaceutical leaders in the areas of oncology, diabetes management, respiratory care, and immunology and infectious disease.