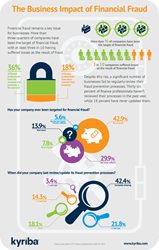 Infographic: the impact of financial fraud on business

The level of attempted financial fraud within U.S. organizations is unfortunately not surprising given the lack of proactive efforts and controls implemented by corporate finance teams.

“The level of attempted financial fraud within U.S. organizations is unfortunately not surprising given the lack of proactive efforts and controls implemented by corporate finance teams,” said Bob Stark, vice president of strategy at Kyriba. “Incidents such as the recent Heartbleed OpenSSL security flaw have clearly demonstrated how reactive companies are to address fraud prevention. Combining these external threats with the continued prevalence of fraud perpetrated from within, highlights how critical it is to implement the appropriate technology alongside financial controls within every organization.”

“There are almost 130,000 medium and large businesses across the U.S., so these statistics suggest that there 25,000 of them are completely unaware of whether they have been defrauded. It’s clearly time for companies to adopt a more hands-on approach to fraud prevention, and take a long, hard look at their levels of exposure,” added Stark.

The poll was conducted of 411 finance professionals, during a webinar hosted by Kyriba on April 10, 2014. Kyriba has developed a white paper in conjunction with the webinar, entitled Leveraging Treasury Technology in the War Against Fraud. It can be downloaded from Kyriba’s website.

A full breakdown of answers is below.

Has your organization ever been the target of an attempted financial fraud?

When did you last review / update your fraud prevention processes?


An infographic of these statistics can be downloaded from Kyriba’s web site.

Kyriba is the global leader in Proactive Treasury Management. Our software-as-a-service (SaaS) treasury and risk solutions enable finance teams to optimize their cash, manage their risk, and work their capital. Our award-winning cash, treasury, payment, risk management and supply chain finance solutions are used by more than 800 organizations worldwide, including Amway, Electronic Arts (EA), PulteGroup, Inc., and Qualcomm, to unlock new business value, drive corporate growth and ensure compliance. For more information on how to be more proactive in your treasury management and drive business value, contact treasury(at)kyriba(dot)com or visit http://www.kyriba.com.