After discovering her boyfriend is married, a woman tries to get her ruined life back on track. 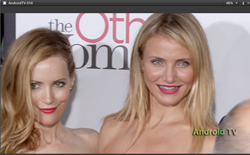 Android TV News: Red Carpet Premier of The Other Woman

"My name is Victor Cruz and I am giving a big shot out to Android TV." said Victor Cruz

After discovering her boyfriend is married, a woman tries to get her ruined life back on track. But when she accidentally meets the wife he's been cheating on, she realizes they have much in common, and her sworn enemy becomes her greatest friend. When yet another affair is discovered, all three women team up to plot mutual revenge on their cheating, lying, three-timing SOB.

"The technology we have developed is changing the way consumers communicate with their TV and devices overall," says Jason Labossiere President of Exo Level.

Exo Level will be running an extensive advertising campaign to attract new customers to the already stable and increasingly popular user base. Dubbed the "We Love TV" campaign, it is designed to showcase what makes the ANDROIDTV.com so attractive to consumers with a wide variety of different tastes and interests.