Garrison Forest sophomores Jackie Magaha and Emily Oleisky were named national runners-up for the 2014 National Center for Women & Information Technology (NCWIT) Award for Aspirations in Computing. The budding computer scientists are the first Garrison Forest School NCWIT recipients and the only recipients from a girls' school in the Baltimore region. 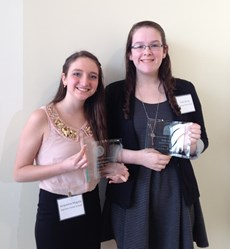 Since 1990-91, the percentage of women earning bachelor’s degrees in computer and information science dropped 11%. At Garrison Forest, we're providing all girls with opportunities like NCWIT to focus their passions in computer programming.

Garrison Forest School sophomores Jackie Magaha (Taneytown, Md.) and Emily Oleisky (Owings Mills, Md.) were named national runners-up for the 2014 National Center for Women & Information Technology (NCWIT) Award for Aspirations in Computing on March 22, 2014 at a ceremony held at Bowie State University. The young computer scientists are the first NCWIT recipients in the history of Garrison Forest School, an all-girls' K-12 independent school with a coed preschool, and the only recipients in 2014 from a Baltimore-area girls' school.

Jackie and Emily, who take AP Computer Science as sophomores, submitted an online application to NCWIT as part of its national competition, in which the demonstrated their commitment to the field of computer science and their related activities. NCWIT named them as national runners-up among an impressive field of budding female computer engineers. The NCWIT Award for Aspirations in Computing offers national and local competitions to generate support and visibility for young women’s participation in computing. As NCWIT award winners, the Garrison Forest winners are eligible for scholarships, internships, research experiences and other educational and employment opportunities provided by NCWIT member organizations.

Both students are leaders in computer-engineering and STEM (science, technology, engineering and math) activities at Garrison Forest. They were the only student leaders on a faculty committee to plan Garrison Forest’s December 2013 “Hour of Code” month of programming-related activities. They collaborated with faculty, coached peers in programming activities, and wrote a blog post about gender disparity in computer engineering. http://www.gfs.org/parents/voicesfromtheforest/detail/index.aspx?LinkId=3769&ModuleId=389

Veterans of the GFS Robotics program, they were part of the Northrop Grumman’s Young Engineering Science Seminars (YESS), a co-curricular STEM opportunity offered through the Garrison Forest James Center (http://www.gfs.org/jamescenter). Also, both are very active in the arts at Garrison Forest.

“In 1990-91, 29 percent of all undergraduate computer and information science bachelor’s degrees went to women, according to the U.S. Department of Labor,” notes Renee Hawkins, Director of Libraries and Instructional Technology at Garrison Forest. “Now, only 18 percent do. Some people say it's because girls don't get the same encouragement as boys. At Garrison Forest, we're changing these statistics by providing all girls with opportunities like the NCWIT competition, to focus their interests and passions in computer programming and other STEM-related areas. We are very proud of Jackie and Emily. They have earned this recognition.”

In addition to a love of computer science, Jackie is recognized state-wide for her Robotics prowess. Earlier this month, she and sister Alyssa, who is in the 7th Grade at Garrison Forest, won three First Place awards at the 2014 Johns Hopkins University Robo-Challenge, an annual middle and high school student robotics competition. They competed in four of the five categories. Jackie began competing in the Robo-Challenge in 6th Grade, often the only female competitor among an older male field. In 2010, she received an Honorable Mention award. In 2011, she won the Robotics Dance division and a Second Place in the Tumor Challenge. For her third year in the Robo-Challenge, she earned her another first place, a point of distinction as the only female solo competitor that year among 100 students. Last year, she and Alyssa won the Robotics Dance competition.

Jackie and Emily will participate in the Garrison Forest/Johns Hopkins University Women in Science and Engineering (WISE) program next semester. Since 2005, Garrison Forest and Johns Hopkins have partnered to provide GFS girls with unique, in-depth research experiences in STEM, public health and the humanities in Hopkins’ lab and programs through the Women in Science and Engineering (WISE) program. WISE and other experiential programs are coordinated through GFS James Center.