Officials are hoping exciting amenities like HD Golf, will help attract more families to the area. 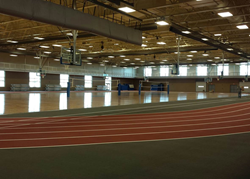 New North Dakota recreation center is one of the largest in the country.

This is truly a game-changer for the town. People were blown away when they saw it for the first time.

Williston may be a small town, but it now has the largest park district-owned indoor recreation center in the country. There are hopes that the new 236,000 square foot facility will help bring more families to live in the oil patch community.

“Williston is already known for its abundance of good jobs and salaries, but we wanted to make it more attractive for families to put down roots,” says Mike Amundson, Facilities Supervisor. “This new center provides an endless array of activities to keep both adults and kids entertained.”

More than 2,500 locals visited the new $76M facility called the ARC, within hours of its opening - from families with small children to oilfield workers still in their overalls. “This is truly a game-changer for the town. People were blown away when they saw it for the first time,” says Amundson. He says locals were lining up to try out some of the amenities, like the HD Golf simulator.

“This new recreation center is top-of-the-line. The people of Williston should be proud,” says Todd Richardson, President & CEO of High Definition Golf. The company’s HD Golf simulator, installed in the center, is the most accurate and realistic system available. “Residents can practice and play golf on the same simulator used by PGA Tour pros,” he says.