A former assistant professor and political and economic advisor calls for abolishing the U.S. income tax and dismantling the IRS to right the wrongs of the current system in this new book released by Dog Ear Publishing. 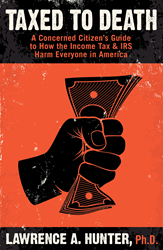 Dog Ear Publishing releases “Taxed to Death: A Concerned Citizen’s Guide to How the Income Tax & IRS Harm Everyone in America” by Lawrence Hunter.

(The book) weaves together economic analysis, political science, history, public choice theory and journalism to expose the effects of the IRS and the income tax system on individuals.

“Income taxes are political and economic weapons of mass destruction used by governments against their own people,” writes author Lawrence Hunter in the introduction to his new book about the United States and the Internal Revenue Service. This former economic advisor warns that the IRS compromises personal privacy, mocks the Constitution and threatens the promise of liberty in favor of collectivism and tyranny.

“Taxed to Death: A Concerned Citizen’s Guide to How the Income Tax & IRS Harm Everyone in America” weaves together economic analysis, political science, history, public choice theory and journalism to expose the effects of the IRS and the income tax system on individuals, who seem to be willing to give up personal freedom and individuality in favor of the “greater good” of society. Hunter details what he sees as the problems of income tax and what he calls its “unseen dangers,” such as less capital investment, fewer jobs and reduced prosperity. He calls for Americans to educate themselves and work to restore personal privacy, individual liberty and economic opportunity by abolishing the IRS and eliminating income tax in the spirit of the original American experiment of democracy.

Author Lawrence Hunter served as a White House policy advisor to President Reagan, was chief economist of the U.S. Chamber of Commerce, chief of staff of the congressional Join Economic Committee, and chief economist, speechwriter and political advisor for Jack Kemp at Empower America. He has written a weekly column for Forbes, published in major newspapers and periodicals and done research for think tanks.

Hunter serves as president of the Social Security Institute, a nonprofit seniors’ advocacy organization, and has been an assistant professor at the University of Maryland-College Park. His Ph.D. is from the University of Minnesota, and he graduated from the University of Wisconsin-Milwaukee. He and his wife have nine children and seven grandchildren.
----------
For additional information, please visit http://www.taxedtodeathbook.com.