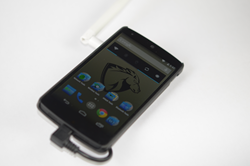 As someone who pentests all the time, having something versatile, that I can slip in my pocket, and use at a moments notice is invaluable to me. The new Pwn Phone is a must have for pentesters.

Pwnie Express today revealed the next generation of its game-changing Pwn Phone, a cutting edge sleek phone that doubles as a powerful penetration testing device making it incredibly easy to evaluate wired, wireless and Bluetooth networks.

The leader in vulnerability assessment and penetration testing devices, the Pwn Phone 2014 is the most portable pentesting device yet. Its custom Android front-end and ‘one-click’ pentesting applications and software updates make it the ideal choice for pentesters who are on the road or conducting a company or agency walk through.

“We are excited to unveil our latest penetration testing device,” said Dave Porcello, Pwnie Express CTO and founder. “Using the popular LG Nexus 5 phone, the Pwn Phone levels the playing field, delivering the 100+ most popular open source assessment and penetration testing tools and leverages the same UI as our popular Pwn Pad but in a smaller form factor.”

“As someone who pentests all the time, having something versatile, that I can slip in my pocket, and use at a moments notice is invaluable to me. The new Pwn Phone is a must have for pentesters,” said David Kennedy, the founder and principal security consultant at TrustedSec LLC, which works with large, medium and small organizations to identify and reduce risk within any size organization. “By adding this quick and easy-to-use device to their arsenal of devices, I can do fast penetration testing of both wired and wireless networks all from my pocket. It’s pretty cool.”

Pwnie Express provides innovative, easy-to-use, rapid deployment products comprised of sensors available in a variety of form factors, like the groundbreaking Pwn Phone, that deliver previously unattainable intelligence. Pwnie makes it incredibly easy to evaluate risk in remote and distributed environments. More than a 1000 enterprises across verticals including retail, finance, health, and manufacturing as well as service providers and government organizations rely on Pwnie Express to know who and what is accessing their networks.

About Pwnie Express
Pwnie Express is the leading provider of innovative sensors that assess network security risks in remote and hard to reach locations. Thousands of enterprises and government organizations worldwide rely on Pwnie Express’s products to conduct drop-box penetration testing and provide unprecedented insight into their distributed network infrastructure. Pwnie Express’s smart devices allow organizations to see all the things while leveraging open source tools and platforms. The award-winning products are backed by the expertise of Pwnie Express Labs, the company's security research arm. The company is headquartered in Boston, Massachusetts. For more information contact http://www.pwnieexpress.com