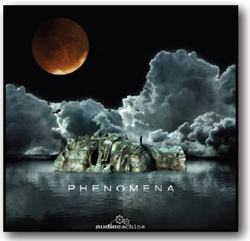 At some level, every cinema-goer hopes to get a little courage and hope from the experience. Those are the essential ingredients of every track of this audiomachine release of epic trailer music.

audiomachine announces the May 6 release of Phenomena, an 18-track album of heart-stopping film trailer music by composer Paul Dinletir.

Music from Phenomena has been used recently in trailers for 300: Rise of an Empire, Draft Day and Philomena, as well as NBC’s opening ceremony broadcast of the 2014 Sochi Winter Olympics.

Phenomena was brought to life in London’s Air Lyndhurst Studio with the seismic beat of 10 concurrent percussionists, a 90-piece orchestra and 80-voice choir.

audiomachine’s compositions can be heard daily on radio, television, online media and in theatres. The Los Angeles-based music collective’s volcanic works are regularly featured on top movie trailers including Avatar, The Hobbit and Noah.

A portion of the proceeds from each Phenomena sale will be donated directly to the Los Angeles Youth Orchestra, an organization that helps enrich the lives of students through the power of music.

Phenomena is available at iTunes, Amazon.com and CDBaby.com