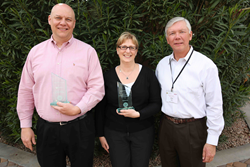 Each year the BMMA recognizes teams and companies that demonstrate innovation or excellence in marketing broadband services.

“Each year the BMMA (http://www.bmma.us) recognizes teams and companies that demonstrate innovation or excellence in marketing broadband services,’’ said Ellis Hill, President of ResearchFirst, Inc., the BMMA’s management firm. This year’s awards went to a Canadian service provider, Manitoba Telecom Services Inc. (MTS), and a vendor company, Actiontec, both of which executed best in class marketing practices related to broadband products and services."

TV enthusiasts can skip the settings menu and enjoy their favorite TV services and features with the touch of a button thanks to MyRemote from MTS. Using a simple set-up process, MTS TV customers can customize the A, B and C buttons on their remote control to perform over 25 functions, including: turn on Accessibility features, launch picture-in-picture, tune to a favorite TV channel, view a log of their incoming phone calls, or check the amount of recording space available in MyPVR.

“We wanted to improve accessibility for our hearing- and visually-impaired customers by giving them the ability to turn on Closed Captioning or Described Video Service with the single press of a button. We saw the potential and expanded this functionality to include other TV applications,” said Paul Norris, Vice President of Marketing at MTS. “This simple innovation has enhanced our core TV service and given us a clear feature advantage over our cable competitors.”

MyRemote is an Ericsson Mediaroom application that runs on the user’s set top box. It was developed internally by MTS in 2011 and re-launched in June of 2013 with an expanded list of options.

Actiontec’s Whole Home Wireless portfolio targets any home broadband subscriber. With everything from smartphones to kitchen appliances now able to access the Wi-Fi network, maintaining a solid wireless connection at home is more important than ever. Homeowners are expecting to use their favorite devices in any and every room in the house. And today’s video, gaming, and media applications rely on home wireless networks to deliver immersive, multiscreen experiences to devices throughout the home.

The new product launched as part of Whole Home Wireless is the WCB3000 MoCA-based network extender. However, instead of simply marketing this as a single product, Actiontec chose to emphasize the overall concept of Whole Home Wireless. After all, the goal of the WCB3000 is to extend the home wireless network to areas of the home that previously didn’t have a strong wireless signal or a signal at all.

Along with the WCB3000, Actiontec launched a free companion app for Android and iOS (Apple) devices. This easy to use app lets consumers quickly check the wireless signal in any area of the home, and identify any dead spots. This lets them know exactly where they need to install a WCB3000 extender to get the best coverage in their home.