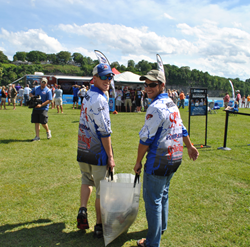 Lake Pickwick bass are the targets to fill the bag at the BoatUS Collegiate Bass Fishing Championship May 22-23. A happy team from the 2013 Championship lug a bag to weigh-in.

These college anglers will come from the North, South, East and West, from big schools and from small ones, but no matter who comes out on top this event will likely be a slugfest.

If the past two years of fishing are any indication, then the 2014 BoatUS Collegiate Bass Fishing Championship presented by Cabela's will once again be the greatest collegiate bass fishing event around.

Now in its ninth year and kicking off May 22, the Association of Collegiate Anglers (ACA) will welcome nearly 200 teams hailing from nearly 30 states and Canada, representing over 100 colleges who will battle it out on Pickwick Lake for 2014 bragging rights. These college anglers will come from the North, South, East and West, from big schools and from small ones, but no matter who comes out on top, this event will likely be a slugfest. Pickwick continues to be one of the hottest lake in the southeast right now, consistently pushing out double-digit bass and limits that easily exceed 20 pounds. If the past is any indication 40 pounds of fish over two days may not be enough to win.

While the tournament will be the centerpiece of the week's events, the competition alone is just the tip of the iceberg. All of the participating students are treated like royalty from the time they arrive today in Florence, Alabama, for the festivities. It's a no-entry fee competition, with lots of sponsor goodies, and even a $100 travel stipend. On top of that, there's over $120,000 in combined prizes available in the form of cash, services, contingency prizes and merchandise.

The actual competition days won't begin until Thursday, May 22nd, but once these young men and women arrive, they will be honored as though they had qualified for any other prestigious fishing national championship. Tuesday, May 20th will be Yamaha Angler Appreciation Night at McFarland Park. Students will gather for dinner, mingle with Yamaha pros, have time to take Ranger/Yamaha demo rides and get help from the respective service crews.

On Wednesday, registration will begin with a sponsor reception hosted by more than 20 very involved corporate entities and sponsors of the BoatUS Collegiate Bass Fishing Championship. Dinner will be provided by the ACA while several other national touring pros, including Skeet Reese, Clark Wendlandt, Jeff Kriet, and others, will be on hand to share in the banquet festivities and offer advice and encouragement to the anglers.

On the two competition days, the anglers will be provided with breakfast and lunch, courtesy of the ACA and their sponsors. At the end of the day on Thursday there will be a cookout donated by Costa Del Mar and Friday's dinner will come from the ACA. If anyone goes hungry next week, they have no excuse.

Even if you can't come to Florence yourself, there's an opportunity for unparalleled virtual participation, because in addition to setting records for overall participation and the depth and diversity of the field, this tournament will have a media presence unlike any other college fishing event to date. It will include a "From the Water Blog," powered by Dodge Ram, which will start to transmit on Monday and reach a fevered pitch on the competition days. Daily photo galleries from the cameras of professional photographers will be posted on Facebook and the ACA website. Weigh-ins will be streamed live and details can be found on CollegiateBassChampionship.com. "With photos, regular updates from the water, and a live weigh-in, we're getting the fans as close to Florence, Alabama, as we possibly can," said Tournament Director, Wade Middleton.

Middleton also said upcoming televised tournament coverage, “Will be too comprehensive to confine it to a single show, so CarecoTV will divide it into three 30-minute episodes.” Each half-hour show will be broadcast nationally on multiple networks as part of the ACA's superior television coverage of collegiate angling (see your local guide or visit CollegiateBassChampionship.com for updates).