Printable NFL Schedules for All 32 Teams Now Available at PrintableBrackets.net 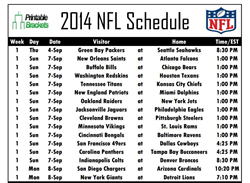 The 2014 NFL Draft is now complete and the start of training camp is just a few weeks away. Just prior to the draft, the league released its complete preseason and 2014 NFL regular season schedule. The games count for real beginning on Thursday, September 4th and run through the season’s final Sunday on December 28th.

Now, printable regular season schedules for all 32 NFL teams are available at PrintableBrackets.net.

“The draft and schedule release means the start of football season isn’t very far away,” said Printable Brackets spokesperson Zaniel Worth. “In fact, the start of the preseason is just a matter of weeks away, and you can follow all the action with our printable schedules and sheets.”

The 2014 NFL season opens up with the defending Super Bowl champion Seattle Seahawks hosting Aaron Rodgers and the Green Bay Packers. The Thursday night showdown is just one of many primetime tilts during the NFL’s opening weekend. Peyton Manning and the AFC champion Denver Broncos will host Andrew Luck and the Indianapolis Colts in the first “Sunday Night Football” affair of the season.

The first Monday night of the year features a doubleheader. First, Eli Manning and the New York Giants will travel to Detroit to take on the Lions. Later in the nightcap, Larry Fitzgerald and the Arizona Cardinals will host Philip Rivers and the San Diego Chargers.

In addition to full schedules for all 32 teams, PrintableBrackets.net has released a slew of other sheets to get fans ready for the upcoming season. The full preseason and regular season schedules are available in a printable format, as well as pick em sheets for all 17 weeks of the campaign.

All schedules and sheets featured at PrintableBrackets.net are available at no charge.
“It’s never too early to get ready for the NFL season,” said Worth.

For NFL schedules for all 32 teams, as well as hundreds of sports tournament brackets and sheets, please visit PrintableBrackets.net.