Pamela Fleming, Vice President of the Institute for Basic Research, Palm Harbor, Florida, announces the publication in February 2014 of the first study of the trajectories of antimatter asteroids in our Solar system that could hit Earth. The study was done by S. Beghella-Bartoli, an expert in trajectories of matter asteroids in our Solar system, with the review by an international panel of experts in antimatter (http://www.santilli-foundation.org/docs/Simone-Final.pdf). 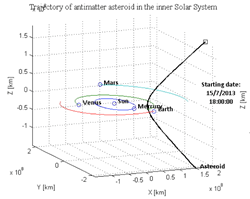 The collision of antimatter asteroids with Earth paralyzes civilian, industrial and military communications for days due to extreme excitation of our atmosphere.

Pamela Fleming, Vice President of the Institute for Basic Research, Palm Harbor, Florida, announces the publication in February 2014 of the first study of the trajectories of antimatter asteroids in our Solar system that could hit Earth. The study was done by S. Beghella-Bartoli, an expert in trajectories of matter asteroids in our Solar system, with the review by an international panel of experts in antimatter (http://www.santilli-foundation.org/docs/Simone-Final.pdf).

"Prerequisites for a consistent study of the trajectories of antimatter asteroids in our Solar system," states Dr. Beghella-Bartoli, "are: 1) The study should be done at the level of Newtonian mechanics; 2) The asteroids should be assumed as being neutral; and 3) The Newtonian representation of neutral antimatter asteroids should be a suitable conjugate of the corresponding representation of matter asteroids. After a long search, the only mathematical and physical theories meeting these three requirements are given by the isodual mathematics and isodual physics discovered by Prof. R. M. Santilli (see the monograph: R. M. Santilli, Isodual Theory of Antimatter with Application to Antigravity, Grand Unification and the Spacetime Machine, Springer 2006). The classical conjugation from matter to antimatter without any possibility of using the conjugation of the charge, implies the gravitational repulsion between matter and antimatter at all levels, from Newtonian mechanics to the Riemannian geometries, as proved in details by Prof. Santilli. Therefore, Earth appears to be protected by the gravitational repulsion of antimatter asteroids thus rendering the impact on earth of matter asteroids much more probable due to gravitational attraction. However, calculations based on Santilli isodual mathematics and physics show the clear existence of conditions under which antimatter asteroids can hit Earth, as established by the 1908 Tunguska explosion in Siberia and other events that, besides leaving no debris in the grounds, created extreme excitation of our atmosphere due to matter-antimatter annihilation into photons. Having studied the trajectories in Solar system of matter asteroids, I conducted the study in response to an alert by a team of scientists on the danger of antimatter asteroids even of modest size because, in the event they enter our atmosphere, all our civilian, industrial, and military communications will be disrupted for days due to the extreme excitation of our atmosphere following the matter-antimatter annihilation." (http://www.santilli-foundation.org/docs/Antimatter-2013.pdf).

"When I was at the Department of Mathematics of Harvard University in the early 1980s," states Prof. Santilli, "I discovered that a mathematics allowing the conjugation from classical and neutral matter bodies to their antimatter counterparts did not exist and had to be constructed. Following various unpublished attempts, I constructed the new mathematics by conjugating the trivial unit +1 used for millennia, into the negative unit -1, and called 'isoduality' their conjugation. Then, I reconstructed 20th century mathematics into a form admitting -1 as the left and right unit at all levels, by reaching in this way the mathematics today called 'Santilli isodual mathematics' that includes novel isodual numbers, isodual spaces, isodual algebras, isodual geometries, etc. Following, and only following the achievement of the needed isodual mathematics, it was easy to reconstruct 20th century physics into a form admitting -1 as the left and right unit at all levels, resulting in a new physics today known as 'Santilli isodual physics; that includes: the first known isodual Newton's equation for neutral or charged antiparticles, the isodual Galilean, special and general relativities for antimatter, the first known Riemannian representation of the gravitational field of antimatter bodies, and other advances. All these efforts were only the beginning of the research. Subsequent years were devoted to the proof that classical isodual formulations are compatible with all experimental data on antimatter, while compatibility at the particle level was assured by the equivalence of Santilli isoduality and the conventional charge conjugation. Following, and only following this long scientific journey. I initiated tests of the experimental detection of antimatter galaxies, antimatter asteroids and antimatter cosmic rays. These tests were the most exciting and rewarding because they required basically new vistas, such as the use of a refractive telescope with 'concave' lenses, today known as 'Santilli telescope,' compared to the conventional Galileo telescope which is based on 'convex' lenses. An outline of this long scientific journey with links to the main scientific publications is available from the various links of the announcement (http://www.santilli-foundation.org/Antimatter-asteroids.html).

Santilli has received numerous honors, including the nomination by the Estonia Academy of Sciences among the most illustrious applied mathematicians of all times; the prestigious Mediterranean Prize also granted to Hilary Clinton, Price Albert of Monaco , France President Nicolas Sarkozy, Juan Carlos King of Spain, and other famous people; and other important prizes (http://www.santilli-foundation.org/santilli-nobel-nominations.html).