Toys“R”Us to Serve as the First Retail Destination to Offer Figures, Vehicles, Plush and More Based On TV’s Number-One Preschool Series 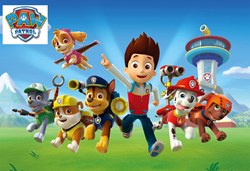 “We are thrilled to partner with Toys“R”Us to bring our beloved PAW Patrol pups to shelves, making it the first retail destination for fans,” said Krista DiBerardino, Chief Marketing Officer, Spin Master.

PAW Patrol™ is on a roll and headed to Toys“R”Us® stores nationwide and online at Toysrus.com on Sunday, May 18. Developed by Spin Master Ltd., Canada’s largest children’s toy and entertainment company, PAW Patrol is the number-one rated preschool series and airs weekdays at 12 p.m. (ET/PT) on Nickelodeon. Through June, Toys“R”Us will be the only retailer to offer eager fans the opportunity to go on an action-packed rescue adventure with an all-new preschool line of plush, vehicles, figures and more based on the ratings hit.

The popular series, PAW Patrol, is a CG-animated, action-adventure preschool series starring a pack of six heroic puppies led by a tech-savvy 10-year-old boy named Ryder. When trouble strikes Adventure Bay, these heroic pups are there to save the day with a unique blend of problem-solving skills, cool vehicles and cute doggy humor. From Marshall, the firedog, to Chase, the police pup, each character brings unique personality and skill to the team, modeling the importance of teamwork and good citizenship. PAW Patrol made its U.S. debut on Nickelodeon in August 2013.

“We are thrilled to partner with Toys“R”Us to bring our beloved PAW Patrol pups to shelves, making it the first retail destination for fans,” said Krista DiBerardino, Chief Marketing Officer, Spin Master. “Children everywhere adore Chase, Marshall, Rocky, Rubble, Zuma, Skye and of course Ryder; and now, they will finally have the opportunity to bring the magic of Adventure Bay to life and play with their favorite pups at home in the form of interactive, imaginative toys.”

“Ever since PAW Patrol hit the airwaves last summer, preschoolers have fallen in love with the show’s delightful characters and captivating storylines and have been eagerly awaiting the arrival of toys based on the hit series,” said Jamie Uitdenhowen, Vice President, General Merchandising Manager, Toys“R”Us, U.S. “We worked closely with our partners at Spin Master to be the first retailer to bring this highly coveted line of toys to children who can’t wait to experience all the excitement and adventures from the show during playtime.”
The all-new product range includes a number of collectable items for children ages 3 years and up:

The PAW Patrol line will launch exclusively at Toys“R”Us stores nationwide and online at Toysrus.com on Sunday, May 18, and will be available at additional select retailers beginning Sunday, June 22. Nickelodeon will debut brand-new episodes of PAW Patrol on Tuesday, May 27 and Thursday, May 29, at 12 p.m. (ET/PT).

Spin Master owns the worldwide toy rights and is responsible for producing and distributing PAW Patrol in Canada through broadcast partners TVO, Knowledge Network and City TV. Nickelodeon licensed from Spin Master the global (excluding Canada) distribution rights for the show on behalf of Viacom International as well as all ancillary exploitation rights, including licensing and merchandising.

On a Roll Marshall