Earvin “Magic” Johnson will be Centerpiece of Launch Marketing Campaign. 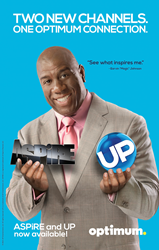 We are pleased to announce the additions of UP and ASPiRE, two high-quality, family-friendly networks that further enhance the diversity and value of our Optimum TV lineup.

Cablevision Systems Corp. (NYSE: CVC) today announced the addition of two networks to its Optimum TV lineup -- UP, the television network dedicated to uplifting viewers every day and Earvin “Magic” Johnson’s ASPiRE, the network that celebrates the breadth and depth of the Black experience and is the entertainment destination for African-Americans and their families. With this launch, Cablevision is the only provider of ASPiRE within its Tri-State area footprint.

The launch of UP and ASPiRE on Optimum TV will be supported with a high-profile, four-week marketing campaign featuring Earvin “Magic” Johnson. The campaign, which launches on May 19th, will include out-of-home media, with transit advertising on Long Island Railroad, Metro North trains and New York City subways, custom cross-channel spots, social media, email blasts and a radio partnership with WBLS-FM and K-LOVE.

UP is a 24-hour television network that provides fresh, contemporary and uplifting family-friendly entertainment that the entire family can enjoy together, including original movies, reality shows, series and music that positively impact people’s lives.

“We are pleased to announce the additions of UP and ASPiRE, two high-quality, family-friendly networks that further enhance the diversity and value of our Optimum TV lineup,” said Bradley Feldman, senior vice president, product management, Cablevision. “Additionally, as the only provider of ASPiRE within the Cablevision service area, our customers will have the benefit of being the first in their neighborhoods with access to ASPiRE’s unique and uplifting entertainment that focuses on celebrating the African-American culture.”

Charley Humbard, UP president and CEO, said, "The launch of UP by Cablevision is a major milestone for our network as it marks the completion of our distribution in every major market in the U.S. and brings our subscriber base to nearly 70 million households. We are extremely proud to be a part of Optimum TV and look forward to providing their customers with our diverse slate of always uplifting, family-friendly entertainment.”

Earvin Johnson, ASPiRE Chairman and CEO, said, “ASPiRE has made tremendous strides since its launch, and being added to the Optimum TV lineup is the latest milestone in our rapid expansion to 20 million households and growing. We are proud to provide our great line-up of positive programming with original series, movies and sports to the Optimum TV viewers in New York, New Jersey and Connecticut."

UP recently announced that it will premiere 30 new original and premiere movies and four series for the second half of 2014 and 2015. The network’s recent “Easter Lives Here” programming celebration culminated with the UP Original Movie Apple Mortgage Cake, starring Kimberly Elise (Diary of a Mad Black Woman) which was a tremendous success, setting new primetime ratings records for the network.

Other ASPiRE original programming includes clean, stand-up comedy series “Laff Mobb’s We Got Next,” “ABFF Independent” and "THE ROOT 100," which explores the lives and groundbreaking accomplishments of dynamic African-American men and women. In addition, ASPiRE will present Historically Black Colleges and Universities (HBCU) live sports events and related series, including six football games, 12 men’s and women’s basketball games and a new season of the sports highlights show “Inside The Game.”

Optimum customers can find UP on channel 175 and ASPiRE on channel 176. UP will be available to customers with the Optimum Preferred package and above, while ASPiRE will be available to Optimum Economy and Optimum Value customers and above. Optimum TV residential customers who receive UP and ASPiRE as part of their package can also watch the networks anywhere inside the home with the Optimum App, which is available from the App Store for their iPad, iPhone or IPod touch, Google Play for Android phones and tablets, or Amazon Marketplace for Kindle devices.

About UP
UP, America’s favorite network for uplifting entertainment is a 24-hour television network that provides high-quality, diverse, family-friendly programming, including original and premiere movies, theatricals, drama and comedy series, music and holiday specials. UP can be seen in 67 million homes in high definition (HD) and standard definition (SD). As part of its mission to entertain and uplift, the network’s pro-social initiative “Uplift Someone” reminds and inspires people to do simple acts of kindness. UP is also a service provider to its sister network ASPiRE. Based in Atlanta, UP is a division of UP Entertainment, LLC, which also offers gMovies, the first faith-friendly streaming movie service. Follow UP on the Web at http://www.UPtv.com, on Facebook at https://www.facebook.com/UPtv, Twitter on @UPtv and Instagram at UP_TV.

About ASPiRE
ASPiRE is a television network that celebrates the groundbreaking achievements of African-Americans. ASPiRE offers a diverse programming mix of movies, series and specials featuring music, comedy, drama, faith/inspiration, theater/performing arts, lifestyle and news/information. The network was launched June 27, 2012 by Magic Johnson Enterprises, which acts as a catalyst for driving unparalleled business results for its partners and fosters community/economic empowerment by making available high-quality entertainment, products and services that answer the demands of ethnically diverse urban communities. ASPiRE is available in about 20 million homes in 21 of the top 25 African-American markets including New York City, Los Angeles, Atlanta, Chicago and Washington, D.C.. For more information, visit http://www.aspire.tv, facebook.com/aspireTV and on Twitter @tvaspire.