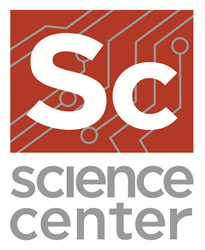 PolakVanBekkum, an artist duo from the Netherlands, are in Philadelphia to lead a dynamic public art residency program, Art Along the Avenue of Technology (AAAT), at the University City Science Center. Esther Polak and Ivar van Bekkum arrived in May 2014 and will spend six months helping to activate the Science Center’s campus through a groundbreaking, place-making and community engagement program.

Through November 2014, the artists will explore the intersection of art, science and technology along Market Street. PolakVanBekkum will create a Google Earth film (NavDoc) that incorporates satellite imagery, photography and GPS to document mobility in the region. “Our work focuses on the mix of art, science and technology, so this project was a good fit for us,” van Bekkum notes.

On the evening of May 29th, from 5:30 p.m. – 7:30 p.m., a “meet and greet” will be held at the Department of Making + Doing on the ground floor of the Science Center building at 3711 Market Street, to publicly introduce the artists, as they begin to assimilate into the community. During the program, PolakVanBekkum will showcase previous projects and outline their anticipated scope of work here in Philadelphia.

“Activating the street level experience of our campus and engaging the community are two major goals of the Science Center,” says Science Center President & CEO Stephen S. Tang, Ph.D., MBA. “PolakVanBekkum’s creative approach to place-making will help us realize our goal of making the Science Center campus a distinctive site for the larger West Philadelphia community.”

The artists plan to break down their project into three phases. The first is a “cultural immersion” process, where the duo will research and study the intricacies of the city. They will then select subjects and chart their travels throughout Philadelphia, collecting data and audible movements. Finally, the compiled information will translate into the Google Earth film and an interactive map outlining the paths of the subjects as they interact with the city. “We start out our work with an end goal, but along the way we work out who will be playing a part and how the story arc will go,” Polak explains. The step-by-step development of the project can be followed via http://www.250miles.net.

Art Along the Avenue of Technology is a collaboration between the Science Center, Wexford Science & Technology and the Philadelphia’s Redevelopment Authority’s Percent for Art Program. PolakVanBekkum was selected by the Science Center and the PRA from a group of approximately 40 applicants after a rigorous review process.

“Art Along the Avenue of Technology is emblematic of the evolution of the Percent for Art program,” says Brian Abernathy, executive director of the Philadelphia Redevelopment Authority. “It will connect artists and their art to the larger community, both locally in Philadelphia and worldwide via the Internet. The Redevelopment Authority is excited to be playing a role in this groundbreaking project.”

About the Science Center
The University City Science Center is a dynamic hub for innovation, and entrepreneurship and technology development in the Greater Philadelphia region. It provides business incubation, programming, lab and office facilities, and support services for entrepreneurs, start-ups, and growing and established companies. The Science Center was the first, and remains the largest, urban research park in the United States. Since it was founded in 1963, graduate organizations and current residents of the University City Science Center’s Port business incubators have created more than 15,000 jobs that remain in the Greater Philadelphia region today and contribute more than $9 billion to the regional economy annually. For more information about the Science Center, go to http://www.sciencecenter.org.