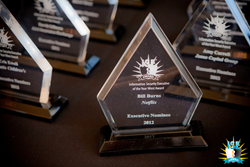 T.E.N. Announces Nominees for the 2014 ISE® West Awards. The ISE® West Executive Forum and Awards are to be held July 30, 2014 at the Westin St. Francis in San Francisco.

We are thrilled to see this year’s group of nominees represent organizations ranging from government to worldwide leaders in entertainment.

Executive nominees are also eligible for the ISE® West People’s Choice Award, which given to the top candidate selected by peers in the security industry. Cast your vote by June 20 for this year’s winner; visit: https://www.surveymonkey.com/s/PCvoting_WEST14.

“We are thrilled to see this year’s group of nominees represent organizations ranging from government to worldwide leaders in entertainment,” said T.E.N. CEO & President Marci McCarthy. “These nominees are making great strides in information security and risk management and we are honored to have them join the ranks of our ISE® Alumni.”

The ISE® West Awards recognize executives and projects, which have made a positive impact on their organizations through risk management, data-asset protection, regulatory compliance, privacy and information security. Nominations are sent to T.E.N.’s distinguished panel of ISE® judges for review and scoring.

All nominees will be recognized at the ISE® West Executive Forum and Awards on July 30, 2014 at the Westin St. Francis in San Francisco, CA. Event attendees can earn up to 5 CPEs for participating in the Executive Forum, which will offer dynamic presentations and engaging roundtable discussions — lead by ISE® Alumni —highlighting a spectrum of the industry’s most critical issues and innovative best practices. Finalists and winners are announced at the awards gala that evening and recognized through press coverage and inclusion on the T.E.N. and ISE® websites.

For more than a decade, the Information Security Executive® (ISE®) of the Year Award Program Series has empowered security executives and their project teams to Connect, Collaborate and Celebrate. Recognized as the industry’s most prestigious IT Security award program, it has become the most anticipated award program for security executives and their project teams. Winners have included executives and project teams from leading organizations such as Nike, The Walt Disney Company, the United States Postal Service, Schlumberger, Texas Instruments, JPMorgan Chase & Co., Equifax, Comcast, PayPal, Northrop Grumman Corporation, and Nationwide.