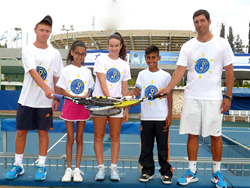 Less than three months after their community was rocked by a deadly gas explosion, PS/MS 7 The Samuel Stern School on East 120th Street will be the site of a special exchange program that is sure to bring much needed joy and inspiration to the students and their teachers.

On Wednesday, May 28, the school is being visited by a team from the Israel Tennis Centers, an organization that helps underprivileged youth throughout Israel. They will be exchanging stories of hope with this East Harlem community as ambassadors of the ITC, whose mission is to teach life skills to underprivileged children through the medium of tennis. They will also be running a physical activities clinic with special guest Dvorah Marsha, one of Israel's former top ranked women tennis players and product of the ITC.

Dvorah's story is as inspiring as the countless acts of heroism by the East Harlem residents impacted by the explosion back on March 13th. A product of the ITC's Immigrant Assimilation program, Dvorah began her own incredible story 20 years ago in Ethiopia when she and her family walked hundreds of treacherous miles from their village in Madradgi to the capital city of Addis Ababa. She eventually immigrated to Israel as part of "Operation Solomon" in 1991 and, at the tender age of 11, was introduced to the fame of tennis at The Marjorie Sherman Israel Tennis Center in Ashkelon. In 2004, Dvorah began coaching there while studying for her degree in Physical Education.

Today, this remarkable young woman is Development Manager at the ITC's New York City office, helping to support the Israel Tennis Centers' vitally important programs that continues to change the lives of thousands of Israeli children every year. As the largest social services organization in Israel, the ITC helps Israeli children no matter what their background or economic circumstance. These include youth at-risk and those with special needs as well as recent immigrants from Russia and Ethiopia. There is also a Coexistence program that brings together Jewish and Arab children to teach them about cooperation, understanding and tolerance, with the goal of building more peaceful communities throughout Israel.

Dvorah and the team of ITC children and their coach will be at PS/MS 7 The Samuel Stern School at 9:30 am to conduct a number of activities in the school yard. Some rackets will be provided, and all the children will be given special ITC tennis bracelets marking this very special occasion. It will certainly be a highlight of their school year, especially after what their neighborhood had to endure back in mid-March during the devastating gas explosion that affected so many of the families near the school.

About the Israel Tennis Centers Foundation:
The Israel Tennis Centers Foundation (ITC) is a 501 (c) 3 not-for-profit organization that has worked since 1976 to help Israeli youth develop life skills through the medium of sport. The ITC serves over 20,000 children annually, many of them from disadvantaged neighborhoods or outlying development towns throughout Israel. The ITC has 14 centers that stretch from Kiryat Shmona on the Lebanese border in the North to Beer Sheva bordering the Negev Desert in the South. http://www.israeltenniscenters.org.