Immunoglobulins or antibodies are proteins used by the immune system to neutralize pathogens including bacteria and viruses. The Life, Earth & Health Sciences Magazine EurekaMag.com has published 31,900 articles covering the interactions between a wide variety of immunoglobulins and pathogens particularly in humans. 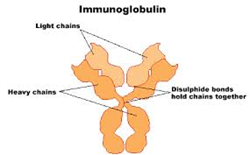 EurekaMag.com has published 31,900 articles on the importance of immunoglobulins for identifying and neutralizing pathogens such as bacteria and viruses. The site's research category covers all articles on the two physical forms of immunoglobulin, the soluble form that is secreted from the cell, and the membrane-bound form that is attached to the surface of a B cell. The Life, Earth & Health Sciences Research Section 29 contains a subset of 2,420 references focussing on the diversity of antibodies allowing the immune system to recognize a wide variety of pathogen antigens.

The Life, Earth & Health Sciences Research Chapter 28214 presents multiple studies demonstrating interactions between immunoglobulins and pathogens including studies on the effects of immunoglobulin and sera from newly diagnosed type 1 insulin dependent diabetic patients on glucose induced insulin release in human islets of Langerhans, interferon induction and suppression of the in vitro immunoglobulin M response by pertussis toxin, immunoglobulin allotype suppression in rabbits, low immunoglobulin G or immunoglobulin A as an indicator of poor prognosis of acute lympho blastic leukemia in childhood, and on the linkage relationship between complementarity determining and framework segments of human immuno globulin variable regions.

Established in 1998, EurekaMag.com is a publisher of references in biology, in the applied life sciences agriculture, horticulture and forestry, in the earth sciences, in the environmental sciences, and in the medical and health sciences. The site currently contains a total of 36.9 million bibliographic references and 20.8 million abstracts from as early as 1703.