Following a recent international workshop on closed containment, Bill Taylor, President of the Atlantic Salmon Federation, comments on the benefits of using land based, closed-containment technology to grow Atlantic salmon. 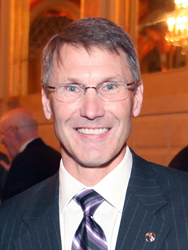 Salmon farming in open sea cages can have significant impacts on wild Atlantic salmon and other ocean creatures.

Why is a conservation organization involved in farming Atlantic salmon? It’s all part of the Atlantic Salmon Federation’s (ASF) mission to conserve wild Atlantic salmon and the health of their environment by separating them from farmed salmon.

Salmon farmers are getting involved in an expanding closed-containment industry that utilizes water recirculation to grow salmon on land. It is an admirable goal that is not without challenges, but it can work. Reducing capital costs (many of which are associated with controlling impacts on the environment) and achieving a conversion rate that produces a pound of salmon for every pound of feed were among the challenges and progress reports presented at a recent international workshop on closed containment, held at the end of April at ASF’s headquarters near St. Andrews, New Brunswick.

Entrepreneurs interested in supplying this market are bucking the conventional method of growing salmon in open net pens in the ocean. Worldwide, a half-dozen commercial facilities using closed-containment systems are now growing Atlantic salmon, with the largest farms located in Canada, France, Denmark and China.

Salmon farming in open sea cages can have significant impacts on wild Atlantic salmon and other ocean creatures. These include lobster killed by chemical treatments to control sea lice and tuna, seals, sharks and eagles that are killed when wildlife is drawn to all the salmon held in ocean cages.

Closed-containment technology is working for the Namgis First Nation on Vancouver Island, who moved closer to achieving their economic goals when they recently marketed their first harvest of KUTERRA-branded salmon that were grown faster using less food. The technology was also about to work for the Nova Scotia company Sustainable Blue, but just before the planned marketing of their salmon, an unexplained power outage in midMarch killed their fish. The incident is being investigated by outside engineering consultants and the police. Convinced that the company is on the right track to help supply a growing market demand for sustainably-grown seafood and get a good profit for it, Sustainable Blue intends to continue its salmon farming venture.

The biggest damage to wild Atlantic salmon is the loss of their genetic diversity and the traits that contribute to their survival of long migrations to sea and back to their birthplace. Through domestication programs, fish farmers select and breed their salmon for traits like fast growth and non-aggressive behaviour. When farmed salmon escape and enter rivers inhabited by wild salmon, they can mate with them and pass these domesticated traits along to their offspring. After only a few generations of wild and farmed salmon interbreeding, the hybrids are no longer adapted to their local environment. Research shows that farmed-wild hybrids have higher egg mortality, lower juvenile survival, and lower survival at sea, compared to wild salmon. Over time, these interactions have the potential to wipe out wild salmon populations.

Escapes from sea cages are still happening in large numbers in Canada – 750,000 reported escapes in Newfoundland in the past decade and significant unreported escapes in New Brunswick that were detected at ASF’s monitoring facility on the Magaguadavic River in New Brunswick. ASF has documented in peer-reviewed research the loss of the wild salmon run in the Magaguadavic River because of interactions with farmed escapees. The Committee on the Status of Wildlife in Canada, in their advice to government, and the Royal Society of Canada, in their report on biodiversity, have identified salmon aquaculture as a significant threat to endangered and threatened wild salmon populations.

ASF’s co-host at our closed-containment workshop was The Conservation Fund Freshwater Institute (TCFFI) of West Virginia. We are supporting TCFFI’s research to develop the feasibility of freshwater closed-containment salmon farming with very encouraging results. Recently, the TCFFI put a limited supply of their farmed salmon into the marketplace. At a Wegmans store in Maryland, closed-containment salmon, raised with no need of antibiotics for disease or chemicals to treat sea lice, in close to 100% recirculated water and with complete capture of waste, were displayed next to sea cage-raised salmon. At $13/lb ($4/lb more than the sea cage salmon), the store’s supply of closed-containment salmon was quickly bought out, helped along by an article by the The Washington Post that explained the merits of the product. Consumers were willing to pay more for farmed salmon grown in a manner that does not spread disease and sea lice to the surrounding environment; does not pollute the ocean with chemicals, fish feces and uneaten food; and does not threaten other species. Consumers also liked the idea of eating salmon that weren’t treated with antibiotics or pesticides.

We are convinced that ASF and our partners are on the leading edge of a transition to closed containment farms. Entrepreneurs are beginning to supply consumers with outstandingly flavourful salmon that is receiving rave reviews from chefs and consumers alike and is grown in facilities that allow no impact on wild Atlantic salmon and their environment. It is only a matter of time before the market demand for this type of sustainable seafood is fully met.

For more information on closed-containment and particulars of the recent workshop at ASF headquarters, visit http://www.asf.ca.

Bill Taylor is President of the Atlantic Salmon Federation, an international organization, headquartered in St. Andrews N.B., dedicated to the conservation, protection and restoration of wild Atlantic salmon and the ecosystems on which their well-being and survival depend. btaylor(at)asf(dot)ca