On May 20th 2014, TrueConf took part as a general sponsor at Video+Conference, the first in a series of international conferences on video conferencing technologies organized by Garets Sp z o.o. in Warsaw, Poland. 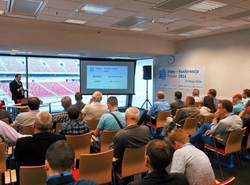 Poland lacked conferences on UC&C where participants could get information on new trends and technologies, not just the news from one manufacturer. Video+Conference fills this gap. The best evidence of it is high interest among the participants.

The Video+Conference events began in 2009 and are now held annually in Moscow and starting 2013 in Kiev. The goal is to educate about the new technologies and trends in the world of Unified Communications. This year, Garets Sp z o.o., an official distributor of TrueConf video conferencing solutions, organized and hosted Video + Konferencja Polska 2014 in Poland with support of developers of professional audio and video equipment, Sennheiser and Logitech.

The event was held in Warsaw in the congress center of the National Stadium and was attended by 50 participants who all dived headlong into the world of modern business communications. The participants had the opportunity to learn what is behind the latest unified communications (UC) trends, such as BYOD, SVC and WebRTC. Speakers also gave presentations on how video conferencing systems are built and how they operate, as well as talking about what to look for in UC solutions for deploying or expanding their existing company video networks.

"Poland lacked conferences on UC&C where participants could get information on new trends and technologies, not just the news from one manufacturer. Video+Conference fills this gap. The best evidence of it is high interest among the participants," says Hubert Oszkiel, head of the video conferencing division in Garets Sp z o.o. "Such interest in the first event encourages us to make it an annual conference."

The event was led by the head of video conferencing division in Garets Sp z o.o., Hubert Oszkiel. In his report, he addressed unified communications architectures and video conferencing, the criteria of selecting a system and their development process.

Lev Yakupov, TrueConf's Director of Marketing, made a report in English. He spoke on the six main concepts in the world of UC&C that modern customers should be aware of. Sennheiser representative, Magdalena Budzyńska, talked about using audio peripherals for UC. The showroom had new Sennheiser speakerphone.

Between the reports, participants could visit the showroom to see and test various equipment for video conferencing, including endpoints, cameras, conferencing systems, audio equipment and speakerphones. They also had the chance to talk to the speakers at the event.

Organizers and sponsors of the conference were generous with prizes: guests had a chance to win headsets and speakerphones from Sennheiser and the grand prize from TrueConf, an iPad Mini, which went to Peter Marek from the Institute of Sport in Warsaw.

"For us, Video+Conference in Warsaw is a big step forward in the international market. The UC&C market in Poland seemed like it needed such an event and we are very pleased that the listeners and speakers were very positive about it," says Michael Gotalsky, TrueConf CEO. "Video+Conference events are becoming more popular, and thus we do not plan to stop there: a lot of informative presentations and pleasant surprises are ahead."

About TrueConf, http://www.trueconf.com, Russian developer of corporate and personal video conferencing solutions. The company develops and provides a wide range of solutions from mobile applications to conference rooms equipment that can be used either in private networks, or over the Internet. Company's cloud video conferencing services connect more than 3 million users worldwide.