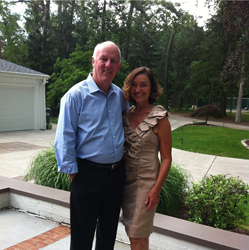 We are fierce in our resolve and will not stop until there is a cure, and look forward to this year’s event as a means to achieving that goal.

After last year’s wildly successful event, Michelle Mackay, wife of retired Kellogg’s CEO David Mackay, and her family will host the second annual festive event to raise awareness and funds for the FSH Society on Saturday, July 5 at their lakeside home in Gull Lake, Michigan. Always an active member of her community, Michelle has dedicated her time and efforts over the past several years to FSH muscular dystrophy.

David and Michelle Mackay work with the FSH Society, a Massachusetts based non-profit that is a world leader in combating Facioscapulohumeral muscular dystrophy (FSHD), a degenerative muscle disease that is the most common hereditary muscle disease in men, women and children. FSHD affects more than 500,000 people worldwide.

The Mackays’ involvement is quite personal: Mrs. Mackay was diagnosed with FSHD in her twenties. For years she dealt with the disease silently until a recent major fall changed her perspective. Mackay has since become a vocal advocate in battling the disease and raising awareness.

Between one and two percent of the population carries a genetic trait that places future generations at risk of FSHD. The disease affects both sexes equally and has no particular racial, geographic or ethnic distribution. The disease causes a progressive loss, wasting and atrophy in all skeletal muscles, usually starting with the locations reflected in the name of the disease: face, shoulder girdle and upper arms. The severity of FSHD can vary greatly as some patients are asymptomatic or have minimal symptoms, while others become wheelchair bound. Currently, there is no treatment.

“Once I realized that hiding the disease was more painful than sharing my story, I began talking about my life with FSHD,” said Mackay. “I soon found that people really wanted to listen – and more importantly, they wanted to help.”

The community is invited to attend the fundraiser via reservations on the FSH Society website. The party kicks off at 4pm with a VIP cocktail hour. The picnic-style dinner will be prepared by San Franciscan chefs Jess Mackay and Gabe Sanders, and the event will feature dancing, a live raffle and auction, and live music by Kris Hitchcock and Small Town Son. A donation of $75 will be accepted for individual tickets and corporate VIP tables also offer a few additional treats! All proceeds directly benefit the FSH Society’s efforts to support patients and research on FSHD. The Mackays will match all donations and hope to surpass the $188,000 raised at last year’s event.

“Through our lakeside event, we hope to raise awareness and funds for FSHD, which remains widely unheard of both to the general public and within the healthcare community,” said David Mackay. “We are fierce in our resolve and will not stop until there is a cure, and look forward to this year’s event as a means to achieving that goal.”
For more event details and registration information, please visit: http://www.fshsociety.org/pages/conELakeside.html.

About the FSH Society
The FSH Society, founded in 1991 by two FSHD patients, is a world leader in combating muscular dystrophy. The non-profit has provided millions of dollars in seed grants to pioneering research worldwide, creating an international collaborative network of patients and researchers. The FSH Society seeks to serve as a source of information and support for all patients and families with FSHD; act as a driving force in the development of research directed towards treatments and ultimately a cure; and bring support to patients and research for FSHD through effective engagement of governmental and private sector organizations and entities. For six consecutive years, the Society has received the Charity Navigator’s four-star rating, the highest distinction held by less than four percent of non-profit organizations in the country. The FSH Society offers a community of support, news and information for FSHD patients and families through its website at http://www.fshsociety.org. For more information about FSHD, please contact the Society at 781-301-6649.