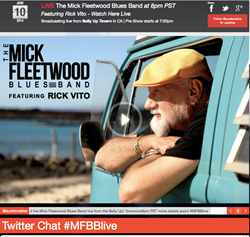 Post data showed an impressive 6.8% conversion rate of sales from video views to number of items purchased inside the video by individual fans.

Suretone Entertainment powered by Cinsay announces today the results from the first online live music event hosted on SuretoneLive.com. Measured by viewership, social interaction and eCommerce, the event was a huge success. The online show, which was planned, only a few days in advance, with less then $400 in advertising and promotion for the virtual portion, yet drew thousand’s to the site’s page. Within a few hours, viewers from 30 different countries around the world were watching and sharing via the web and on mobile devices.

The online portion of the concert was set up just days in advance to showcase the evolved technologies of Cinsay’s Video Smart Store™ platform and to launch the next evolution of online music entertainment, seamlessly bundled with social sharing and eCommerce. Online viewers had the exclusive opportunity to not only see interviews with the performers and the live concert but to also purchase VIP packages for Fleetwood Mac’s upcoming fall tour, apparel from Mick’s restaurant and music venue, ‘Fleetwood’s’ on Front Street, and to win several one-of-a-kind items autographed by members of the bands. During the live feed, tens of thousands of dollars of merchandise and fan packages were sold. Post data showed an impressive 6.8% conversion rate of sales from video views to number of items purchased inside the video by individual fans.

“Just phenomenal: This event was history-making! We (the band) got back to our roots playing a small venue, which we love to, and had the ability to share that experience up-and-personal with thousands of fans all over the world,” said Mick Fleetwood of The Mick Fleetwood Blues Band. “The SuretoneLive and Cinsay solution is not only the best thing to happen to the music industry in years but it will be the biggest.”

During the concert, which featured 8-HD cameras, fans commented on and shared the multi-patented video player with others via Facebook where the video could be embedded providing an exponential growth of videos beyond the main site and increased views throughout the night’s two-hour performance. Each minute of streamed video averaged $174.05 in merchandise revenues.

Fans also competed to win one of several packages by tweeting the hash tag #MFBBlive on Twitter. Before the concert had ended, the tag and related posts had been sent over 4,200 times on twitter alone. In fact, Fleetwood’s restaurant in Maui, Hawaii benefitted from the show’s success. The restaurant’s Facebook fan page posted the video feed and reported an increase in page ‘likes’ by over 2,800% and fan-page engagement increased by over 530%: a conversion rate of over 8% per view.

“We did all of the preparation and set up in under 50 hours and spent less $400 dollars to promote it,” said Christian Briggs, founder and CEO of Cinsay. “The marketing consisted of a press release and a few targeted Facebook boost posts to get the word out at the last minute. After that, the multi-patented technology of our Video Smart Store platform did the rest as music fans shared it with others on social media globally,” Briggs added. “Last night’s concert totally proved Cinsay’s simple, but powerful tag line; Watch. Shop. Share™.”

“The success of this online event proves we’ve built a revolutionary new distribution model that works for artists and fans,” shared Jordan Schur, Co-Founder of Suretone Entertainment. “There’s been a lot of recent news on the decline of the music industry in general. But the fact is, the music industry is in the middle of a huge revolution and SuretoneLive powered by Cinsay is the very best and only business model to allow that industry to grow and thrive…NOW,” Schur added.

Carl Stubner, Co-CEO of Suretone Entertainment said, “We we’re extremely pleased with the sales results. SuretoneLive.com is already in the process of scheduling over 250 more live concerts featuring artist interviews, music festivals, and special fan-based events around the globe.”

Cinsay and Suretone Entertainment announced the formation of SuretoneLive.com in May 2014 and the response from the partnership has been overwhelming from artists, fans and advertisers within the music industry.

SuretoneLive.com will be announcing exclusive live events in the coming weeks as more artists join the premiere broadcast network. Music fans will be able to choose from various live performances from traditional rock, blues and country to alternative rock, hip-hop and emerging artists.

Performances will be hosted in famous venues, music festivals and intimate clubs around the world and enable viewers the ability to share the music with friends and family via Facebook, twitter, Tumblr, Instagram and other social media sites. Each event will also showcase limited-available merchandise from those participating artists including some one-of-a kind collectibles, which will be available only on SuretoneLive.com and all purchasable inside the videos.

*Statistics shown are provided by using data from Google Analytics, Akamai and Cinsay’s CMS reporting tools. Cinsay does not guarantee the same results for every live or achieved event.