The Johnson City Folk Festival/Buffalo Valley Folk Festival bring affordable, accessible music to The Mountain Kingdom September 25-28; Festival Tickets are $10 per day, with parking, plus camping in The Meadow at $10 per night. 70 Artists, 5 Stages, Craft Beers - Shocktop and Goose Island plus 12 additional brands - and fresh baking bread and Farmhouse BBQ at The Peacock Cafe on-site, round out an outstanding Summer Festival Value Package. 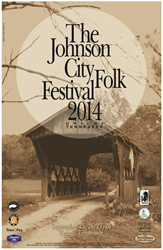 This Festival gets better and better... great management and a remarkable setting plus the best musical line-up of up-and comers in the land! - Tim Banes, Nashville Radio Round-Up

The Johnson City Folk Festival is coming up. Opening Day is Thursday, September 25th at The Farmhouse Gallery and Gardens in Unicoi, Tennessee.

And for Unicoi, Tennessee, a sleepy little mountain village, that's big news, because this little Festival is about to get a lot bigger, a whole lot bigger.

That’s because this is one of the best summer Festival packages offered in 2014. The admission fee is $10 per day and camping is $10 per night and for Festival vendors wishing to present crafts, specialty foods, jewelry or any other folk-like products, the vendor fees are also $10 day.

For $10, a daytripper will have access to 5 stages, 50 musical acts, music, refreshments, The Peacock Café, kite flying, trail hiking and a remarkable array of trails and woodlands, streams and bridges to explore and embrace.

That’s less than a parking ticket. That’s a lunch check. That’s a mixed drink downtown. That’s a remarkable price for a day’s worth of stellar entertainment in a spectacular setting. Parking included.

The Johnson City Folk Festival has added 2 additional performance stages, a full Storytelling schedule and integrated a CycloCross event into the 2014 Program.

And The Johnson City Folk Festival will be merged with The Buffalo Valley Folk Festival in 2015 to expand its reach and impact but the effects will be on display this season. There will be an increase in musical offerings, some stages will be open all night and camping opportunities have been significantly expanded.

The Farmhouse Gallery and Gardens in Unicoi, Tennessee, will host the 4th Johnson City Folk Festival. This is its 2nd year in this location and it has proven to be a watershed because of the setting - on the edge of The Cherokee National Forest - and its complements - 50+ acres of pristine woodlands, streams, bamboo groves and period buildings.

These include a perfectly re-constructed 18th century working blacksmith's shop and a hand-made covered bridge in the exact style of the historic 1800's models.

Tickets for The Johnson City Folk Festival/Buffalo Valley Folk Festival can be purchased in advance: http://www.eventbrite.com/e/johnson-city-folk-festival-in-unicoi-tickets-11294675679.

The Tennessee Department of Tourism has placed the Johnson City Folk Festival in Unicoi on its Tennessee Vacations website; this excellent resource has many details of the Festival for travelers and tourists to The Mountain Kingdom.

The Covered Bridge entrance...Hand made covered bridge is the entrance to The Johnson City Folk Festival in Unicoi, TN