National moving company to march in Pride Parades across the country throughout June. 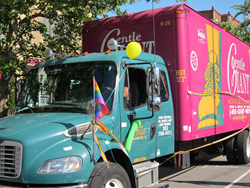 Gentle Giant Moving Company is invested in its commitment to diversity and we value the events and initiatives that matter to our employees and the customers we serve.

Gentle Giant Moving Company, the award winning local and long distance moving company based in Boston, will proudly participate in four Pride events across its New England to California footprint in continued support of the lesbian, gay, bisexual and transgender (LGBT) community.

At Gentle Giant, pride is valued and acknowledged every day, and has been actively involved with the LGBT community for decades. For the past three years, Gentle Giant’s Boston moving team has been marching proudly in the Boston Pride Parade. The company’s involvement in the Parade was such a success with employees and the community that they began getting involved in Pride events in additional cities across the country in which they have regional offices.

"Gentle Giant Moving Company is invested in its commitment to diversity and we value the events and initiatives that matter to our employees and the customers we serve. In addition to being a sponsor of Pride nationally, we aim to be a full community partner and supporter of the LGBT community," said Larry O’Toole, Gentle Giant’s Founder and President.

Gentle Giant employees, family and friends of employees, and volunteers will participate in the Pride events by marching in the parade next to the iconic purple Gentle Giant trucks, engaging the crowds and distributing giveaways.

To learn more about Gentle Giant Moving Company, where Strength in Service is guaranteed across the country, stop by one of their 20 offices, visit them at http://www.gentlegiant.com, find us on Facebook at @gentlegiantmovingcompany or on Twitter at @gentlegiantmove.