IT&LY HAIRFASHION, N.A., known for supporting Hollywood television and movie sets around the world with its full line of professional-only hair care and hair color, proudly sponsors the Costume Designers Guild for their creative contributions. 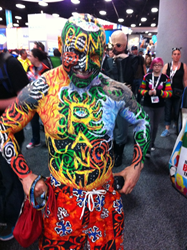 The Costume Designers Guild mirrors the creativity and talent we as hairstylists and make-up artists use for the overall finished expression.

Richard Zucckero, CEO and President of IT&LY HAIRFASHION, N.A. http://www.italyhairfashion.com, proudly announces the company’s sponsorship of the 9th Costume Designers Guild at Comic Con held in San Diego, CA on July 24-27, 2014 at the San Diego Convention Center. Due to the company’s long standing support of Hollywood’s hairstylists and make-up artists of Union 706, IT&LY HAIRFASHION, N.A. has extended their backing to include yet another critical component of the overall “look” by being a Platinum Sponsor for this event.

According to Mr. Zucckero, “The Costume Designers Guild mirrors the creativity and talent we as hairstylists and make-up artists use for the overall finished expression. Together, our industries duplicate characters to the specifications that producers and directors wish to depict.”

With over 130,000 attendees in 2013, Comic Con offers the perfect venue during its 4-day run to honor the talents of Costume Designers and Illustrators. As a Platinum Sponsor and in recognition of its ubiquitous presence and exceptional reputation among Guild Professionals, IT&LY HAIRFASHION, N.A.’s support will be noted on the Red Carpet and throughout the venue. Their logo will be featured on limited edition t-shirts and printed materials and products included in gift bags for attendees, VIP Guests and celebrities.

In 1989, IT&LY HAIRFASHION N.A., Inc. began its mission to create a company that would manufacture and distribute the finest quality, professional hair color products. These products would include complete hair color systems from the initial cut & color to unique after-color products that would be guaranteed to extend the "just colored" look, feel and condition of your clients' hair.

About the Costume Designers Guild: