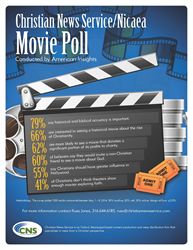 According to a survey of 1200 respondents from Oxford-based Christian News Service and conducted by American Insights, 79% of those polled say “historical and biblical accuracy is important.”

The so-called “Year of the Bible” has Christian moviegoers packing movie theaters across the country. Films like the SON OF GOD, MOMS NIGHT OUT and GOD’S NOT DEAD racked up a combined 218 million dollars in ticket sales in 2014.

A new survey, however, reveals the faithful won’t be duped by movies that are Christian in name only.

According to a survey of 1200 respondents from Oxford-based Christian News Service and conducted by American Insights, 79% of those polled say “historical and biblical accuracy is important.”

Two-thirds (66%) of all adults and 74% of Christians (who make up 63% of all survey respondents) are likely to see a movie related to God.

The Christian News Service/NICAEA Movie Poll also found that 66% are interested in seeing a historical movie about the rise of Christianity.

An element of the study gauged the interest of the viewing public for two upcoming movies, EXODUS: GODS AND KINGS, which is a Ridley Scott directed film with Christian Bale as Moses, and NICAEA, an independent film about Constantine The Great, St. Athanasius, The Council of Nicaea, and the theological question concerning the nature of Jesus of Nazareth.

Among those polled 62% of the Christian community, and 57% of the general public, plan to see the film NICAEA based on the account of the Council of Nicaea at which Christians affirmed the full divinity of Jesus Christ.

“Taking liberties with the Bible for dramatic purposes like Dan Brown did in ‘THE DA VINCI CODE,’ or the more recent film ‘Noah’ is nothing new in Hollywood,” said Parlato. “Brown’s contentions are clearly false, and I am not willing to let his interpretation of history stand unchallenged.”

80% of the Christian community plan to see the upcoming EXODUS movie if it remains true to biblical accounts. However, that number falls off to 29% if the movie fails to be biblically accurate.

“This poll was conducted for the purpose of guiding the film and television industry in its production of both historically-based films and movies that explore questions about God,” said Jones. “The results clearly show that the public will not be toyed with in regard to accuracy in both biblical and historical accounts.”

Furthermore, 79% of Christians and 71% of all adults say, “The biblical accuracy of the story is important” when deciding whether to see a faith-based movie. 52% of Christians strongly agree with that statement.

“The results are clear. Hollywood must look at this poll and acknowledge that the audience it seeks to serve must in every way be respected, and that respect includes the deeply held beliefs of that audience,” said Parlato. “The true artist can ask probing questions, but the questions must be asked honestly and must reflect historical and Biblical accuracy. We should not be surprised by the poll results. They simply affirm common sense.”