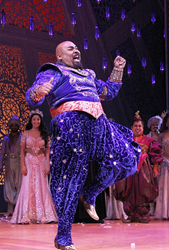 The magical Broadway musical Aladdin is proving very popular with theatre-goers. Based on the 1992 blockbuster, the play features recent Tony Award winner James Monroe Iglehart (above) as the Genie.

It's like a dream come true. For those wishing to see a stage version of Disney’s 1992 animated film classic "Aladdin", the wait is finally over. Some 22 years after the blockbuster first hit theaters, the musical has now magically materialized on Broadway.

After a preview run began last February at the New Amsterdam Theatre, tickets were released today to over 234 full dress performances through January 4 of next year. Adapted for the stage by writer Chad Beguelin and eight-time Oscar-winning composer Alan Menken, the play features hit songs from the film, plus several more written for Broadway.

Directed by Tony-winner Casey Nicholaw, the production also features Adam Jacobs and Courtney Reed as Aladdin and Jasmine, Jonathan Freeman as Jafar (reprising his part from the movie), and recent Tony Award winner James Monroe Iglehart taking on the role of the Genie: an ardent assignment given actor Robin Williams' memorable movie moxie.

“Like the film, the play is garnering rave reviews in its own right. Not only was it nominated for a remarkable five Tony Awards including Best Musical and Best Original Score,” said Marta Ault at online discount ticket marketplace BuyAnySeat.com, “James Monroe Iglehart, who stars as the genie, also won the 2014 Tony Award for Best Performance by an Actor.

"That’s why we’re proud to be able to offer theatre-goers the most comprehensive and continuously updated selection of discount theatre tickets online, with a Worry-Free Guarantee to protect their purchase,” added Ault.

“To access our complete listing of cheap Aladdin tickets, as well as all available seating options, customers can go to BuyAnySeat.com and search for Aladdin, then select their tickets.”

The story, created from centuries-old folk-tales including "One Thousand and One Nights”, was a massive box office success and sold a record-breaking 25 million VHS recordings. In the musical, Aladdin, played by Adam Jacobs, is a charismatic street rascal in Agrabah, who stumbles upon an ancient lamp that proves to be much more than meets the eye.

Unwittingly, he frees the lamp's rib-tickling Genie, played by James Monroe Iglehart, who grants him three wishes. Transformed from vagrant to prince, Aladdin catches the eye of the beautiful Princess Jasmine, played by Courtney Reed, who is longing for an adventure. Unfortunately, the wicked royal vizier Jafar and his minions are plotting to use the lamp for evil and it is up to Aladdin to keep Agrabah out of his grasp.

The original soundtrack for the film won an Academy Award and Golden Globe for Best Original Score for composer Alan Menken and lyricists Howard Ashman and Tim Rice. Menken also wrote songs for "The Little Mermaid”, "Beauty and the Beast" and "Newsies”.

The film’s music also tallied a BAFTA Award nomination, while the song "A Whole New World" earned an Academy Award for Best Original Song, a Golden Globe Award for Best Original Song and the Grammy Award for Song of the Year with lyricist Tim Rice. In addition, the movie album is one of the best-selling animated film soundtracks of all time, with nearly two and a half million copies sold in the U.S. alone as of April 2014.

According to the production's website, Aladdin promises to be a “vibrant and fabulous stage spectacular that audiences of all ages will love!” Official ticket prices range from $57.00 to $133.00.

To shop for discount Aladdin tickets, visit BuyAnySeat.com. To save to even more, enter coupon code "BAS2014" during checkout.

About BuyAnySeat.com: An online discount ticket marketplace, BuyAnySeat.com connects sports, theater and other live entertainment fans to an extensive worldwide network of ticket sellers. The site’s simplified listings and navigational tools enable fans to easily locate, compare and purchase inexpensive, discounted or lower-priced tickets to virtually all advertised sports and entertainment events around the globe.

The marketplace, which is PCI-compliant and Norton Secured, also provides customers with a complete Worry-Free Guarantee on all ticket purchases. Based in Denver, Colorado, BuyAnySeat.com is a subsidiary of Denver Media Holdings. For more information, please visit http://buyanyseat.com.