Caught On Videos this Week: Cameras Catch Cat Burglars Dropping in, Animal Rescues and Children Who Just Want to Be Happy

In this week's Caught On Video, catch happy moments with kids, some touching moments with animal rescuers and the troubling video evidence of a new way burglars are breaking in. 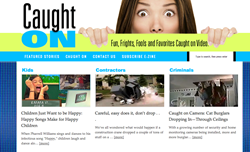 Pervasive cameras have changed our world. We are more secure today, because of them. We also capture more of life’s treasured moments thanks to cameras everywhere.

Caught On Video focuses its lens on happy, troubling and touching scenes, as security cameras, candid video and fun set-ups reveal happy children, burglars in trouble and a heart-warming story of animal love.

"Caught on Camera: Cat Burglars Dropping in—through Ceilings”
With a growing number of security and home monitoring cameras being installed, more and more burglars are getting caught dropping in—through the ceiling. If security camera footage online is any indicator, there’s a virtual epidemic of gravity-challenged burglars.

“Camera monitoring makes all the difference,” explained Maureen Campbell, Director of Marketing and Communications at iWatchLife, a do-it-yourself home video monitoring service. “Recording video and sending an email notification while activity is occurring, like the iWatchLife service does, allows you to act faster and conceivably catch burglars in the act. Even if the suspect escapes, the video can potentially be used in the investigation, arrest and conviction. Our service records to the cloud, so even if a thief steals or destroys the camera, his picture is already safely stored to be used against him.”

"Dog Rescue: How Kindness Saved this Sick, Homeless Pit Bull—the Power of Compassion"
“We received a call about a pit bull in desperate need of medical care,” begins a trending video, featuring the inspiring rescue of a dying pit bull. “The dog had been living in an abandoned lot for several months. He was sick and struggling to survive.”

The patient rescuers gently lure the distressed and dying pit bull, named Gideon, in this very touching story—a must-see video for people who love dogs. We watch as they nurse the ailing dog back to health, and time-lapse images show the stunning transformation from dying and wounded Gideon, to healthy and robust Gideon.

"Children Just Want to be Happy: Happy Songs Make for Happy Children"
When Pharrell Williams sings and dances to his infectious song “Happy,” children laugh and dance along. The hit song made number one on the charts in the United States, UK, Australia, Canada and nineteen other countries.

A new video from FineBros, “Kids React to Pharrell,” demonstrates the near-magical effect of this “Happy” phenomenon. In the video, children are captured in candid camera moments, reacting to the “Happy” 24-hour music video.

Pervasive cameras have changed our world. We are more secure today, because of them. We also capture more of life’s treasured moments thanks to cameras everywhere. Our phones have cameras. Street corners, stores, businesses and subways all have them. Increasingly, more and more homes have them—and not just at the door for security, but throughout the house.