Family-owned Mackinaw Mill Creek Camping celebrates its 50th year of operation this July with a parade through the park and other special events. 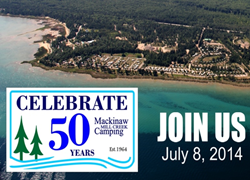 We wanted to honor the memory of our parents. They dreamed of creating a campground in a beautiful natural setting where people could come to reconnect with nature and each other.

On July 8, 2014, campers will enjoy the official celebration of Mackinaw Mill Creek Camping's 50th anniversary. The party starts off with a parade through the park featuring The Lutheran Van Guard Marching Band, antique vehicles, and floats. Other events include wood carving demonstrations, live musical performances, ribbon cutting with the Mackinaw Chamber of Commerce, and a BBQ. The Grand Marshals of the parade will feature the very first campers to check in when the camp opened on July 1, 1964 — Malcolm and Phyllis Smith of Livonia Michigan.

“We did a lot of planning to make sure our 50th anniversary is special. We wanted to honor the memory of our parents. They dreamed of creating a campground in a beautiful natural setting where people could come to reconnect with nature and each other. The camp opened with just 17 sites renting at $2.00 a night. From the start, campers liked mom and dad's little place on the lake with a sandy beach. With a lot of work, little by little, year after year, our family has built the park into one of the largest and most popular campgrounds in the Great Lakes region,” explained Vince Rogala.

Recipient of numerous awards and most recently named as The Favorite Campground in Michigan by viewers of TV 9 & 10, Mackinaw Mill Creek Camping features a mile of shoreline with campsites and cabins viewing the Mackinac Bridge, and Mackinac Island. Amenities include a heated pool, park store, arcade, modern restroom and shower facilities as well as sites for all types of campers (including the only Mackinac bridge-view campsites available anywhere). The campground operates Mackinac Lakefront Cabin Rentals, and gives guests discounts for its 310 acre, 18 hole Mackinaw Club Golf Course.

The party begins with a parade through the park featuring a Marching Band!

One of the celebration's many events is a wood carving demonstration