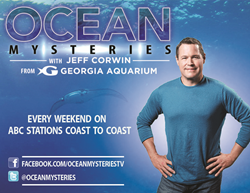 "Receiving these Emmy® awards across such a wide array of categories is such a gratifying experience and a source of great pride for the Litton family,"commented Dave Morgan, Founder and CEO of Litton Entertainment.

"Litton Entertainment is extremely proud to have Ocean Mysteries, Patrick Green and the programs within Litton’s Weekend Adventure recognized by the industry's leading authorities on quality programming. Receiving these Emmy® awards across such a wide array of categories is such a gratifying experience and a source of great pride for the Litton family. I salute our ABC Owned Station partners and ABC affiliated television stations and congratulate our talented and dedicated team of professionals who work tirelessly to educate and inspire audiences across America and around the world,” commented Dave Morgan, Founder and CEO of Litton Entertainment.

Host Jeff Corwin and the team of dedicated scientists and researchers from Georgia Aquarium have opened viewers’ eyes to the extraordinary stories that lie beneath our oceans. The series has taken viewers to locations including Alaska, New Zealand, Botswana and beyond as Corwin works alongside researchers from Georgia Aquarium, its partner institutions and like-minded organizations and agencies to better understand issues facing our planet and the animals inhabiting it. The team’s discoveries provide the audience with a unique perspective on how to protect endangered and threatened species while enhancing our understanding about our ocean's life-sustaining value to the planet.

“Georgia Aquarium is proud of our partnership with Ocean Mysteries and Litton Entertainment and congratulate everyone who has worked to educate millions on major issues affecting the animals inhabiting our planet through this series,” said Carey Rountree, senior vice president of sales and marketing at Georgia Aquarium. “Ocean Mysteries brings the underwater world to viewers’ homes and hearts every week. We look forward to telling more important stories and inspiring others to help make a difference.”

The new season will launch October 4, 2014. To learn more visit http://www.facebook.com/oceanmysteriestv and http://www.twitter.com/OceanMysteries

ABOUT GEORGIA AQUARIUM
Georgia Aquarium in Atlanta, Georgia, contains more than 10 million gallons of water and has the largest collection of aquatic animals. The mission of Georgia Aquarium is to be an entertaining, educational and scientific institution featuring exhibits and programs of the highest standards; offering engaging and exciting guest experiences promoting the conservation of aquatic biodiversity throughout the world. Georgia Aquarium is an accredited member of the Association of Zoos and Aquariums and the Alliance of Marine Mammal Parks and Aquariums. For additional information, visit http://www.georgiaaquarium.org.

ABOUT JEFF CORWIN
Emmy-winning television host, author and biologist, Jeff Corwin has worked for the conservation of endangered species and ecosystems around the globe. Through education and awareness, he believes these vital elements of our planet can be conserved for future generations. For nearly 20 years, Jeff has produced and hosted a variety of popular television series broadcasted on networks like Disney Channel, Discovery Channel, NBC, Animal Planet, Travel Channel and the Food Network. Presently, Jeff is executive producer and host of the award winning weekly series, Ocean Mysteries, airing weekends during Litton’s Weekend Adventure on ABC stations nationally. In addition to exploring the state of our planet's wildlife and ecology, Jeff has serves as an environmental and science correspondent for CNN, CBS and NBC news. Jeff’s wildlife and conservation work has been regularly featured on a variety of broadcasting networks including CNN, FOX, Good Morning America, The Today Show, CBS Morning Show, and Ellen. Beyond television, Jeff has partnered with the Wittaker Center to produce the film Expedition Chesapeake, and with Rodale to publish the book 100 Heartbeats. Jeff is also the author of Living on the Edge: Amazing Relationships in the Natural World and founder of EcoZone, an environmental education center in Norwell, MA. Jeff lives in Massachusetts on a small island with his wife and two daughters.