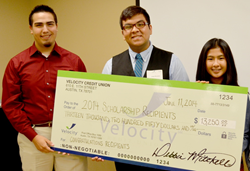 “Each year, we are so impressed with the academic excellence and community involvement of so many of our young members. This year, the top candidates were so exceptional that the board of directors added an additional award,” said Debbie Mitchell, president/CEO, Velocity Credit Union.

Velocity Credit Union is one of the Austin area's largest credit unions with five branches located in Austin and Round Rock. Chartered in 1947, the credit union serves a diverse field of membership that includes anyone in the five-county area, as well as dozens of select employer groups and associations. The credit union employs approximately 185 people in the area, has assets of approximately $660 million and serves more than 70,000 members.